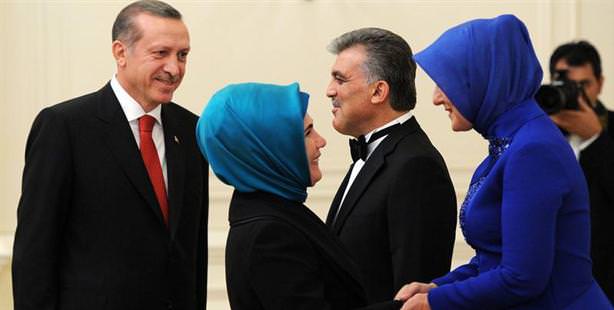 President Gül's presidential reception held at the Çankaya Palace to commemorate the founding of the Republic was the first time members of BDP, the Kurdish nationalist opposition party, convened under the same roof as high-level military members. The full command echelon attended last night’s ceremony joined by their spouses, marking a first for Turkish democracy.

After a tense start to October 29th Republic Day celebrations in Ankara, the evening's presidential reception which brought the summit of the state together with their spouses, became in essence a "night of harmony" as well as the stage for a number of firsts. Hosted by President Abdullah Gül and his wife Hayrünnisa Gül, last night's reception marked the first time deputies from the Peace and Democracy Party, or BDP convened with the military under the same roof.

With approximately 1,700 invitees, including spouses, attendance at the annual reception held at Çankaya Palace was significantly higher this year. The President and First Lady greeted their guests, shaking their hand one by one as they entered the residence. Amongst those in attendance were Prime Minister Tayyip Erdoğan, Speaker of the Parliament Cemil Çiçek, the echelon of the Turkish Armed Forces, minister, deputies and a number of well-known figures from the arts, business and sports worlds.

A FIRST FOR COMMANDERS

One of the main firsts to go down in history during last night's reception for October 29th Republic Day, was the attendance of the Turkish army's command echelon. Last night marked the first time that leaders of the Turkish Armed Forces attended a ceremony at Çankaya Palace accompanied by their spouses since President Gül came to power in 2007. In years past, the military would hold a separate reception at the Military Headquarters in Ankara. Commanders would attend a ceremony held during the day, in which spouses were not invited. The tradition of holding receptions without spouses was brought to an end in 2010; however the higher-level military members refrained from attending that year's ceremony. Last year's reception was cancelled due to the Van earthquake.

Yet another first was the presence of both the military as well as members from the Kurdish nationalist opposition party BDP at the reception. Although BDP Chairman Selahattin Demirtaş chose not to attend due to an ongoing hunger strike, the presence of BDP members Sırrı Sakık, Hasip Kaplan and independent deputy Ahmet Türk was indeed striking marking the first time members of BDP have been present alongside members from the military at the Presidential Palace.

Main opposition party CHP Chairman Kemal Kılıçdaroğlu did not attend last night's reception and chose instead to participate in a different event in Istanbul. Qualifying CHP's attendance of an alternative celebration in honor of the foundation of the Republic as "separatism" nationalist opposition party MHP Chairman Devlet Bahçeli attended the presidential reception along with his fellow party staff.

Remarking on the reception held at the palace in which spouses were invited, Gül stated, "There are some pictures that are extremely meaningful. Today's picture is one of those meaningful ones. These pictures are a source of morale for our community." Upon the mention of previous receptions which were held without spouses, Gül stated, "Some things remain in the past. There is a time for everything. However, today we are happy and we are proud," stated Gül who went on to note that the atmosphere in the Palace was a reflection of Turkey and emphasized that it was also a source of morale. Mentioning that polarization has always existed in Turkey's political history, Gül underlined the fact that this style of politics needs to be changed. When asked to comment on the civil war in Syria, Gül stated, "Syria is destroying itself," and also warned that there is still a way out.

'THE HUNGER STRIKE NEEDS TO COME TO AN END'

President Gül also commented on the hunger strike which has been ongoing amongst inmates for over a month now. Stating that hunger strikes do not contribute to reaching a solution, but instead only intensify the issues, President Gül stated that from a medical standpoint, the hunger strike needs to be intervened. "Turkey has experienced these sorts of pains in the past and they always reaped unpleasant results. We need to not allow this to happen. In Turkey, everything is now discussed. Those who do not have the freedom of expression can look into other routes, however in Turkey all sorts of contradictory thoughts and demands can be discussed."

Asked to comment on the prohibition of a rally in Ulus, Gül stated, "Everyone should be able to celebrate this holiday however they like without disrupting others. I wouldn't have wanted what happened in Ulus to transpire. Upsetting events happened and hopeful they will never be repeated."President Gül also noted that they had sent out letters to governors to celebrate this holiday "with joy".

Commenting on last night's reception, which marked the first time Erdoğan was joined by his wife at a reception held at Çankaya Palace, the Prime Minister stated, "Those who denied me the right to attend receptions with my wife should be ashamed." Referring to the attendance of the military's high-level commanders and their wives, Erdoğan said, "it was nice" and emphasized that if this had happened ten years ago then there would have been a number of nicer things in this nation.

'I DIDN'T GIVE THE ORDER'

Asked to comment on the prohibition of a rally in Ankara's Ulus Square that got out of hand, Erdoğan said that he was not the one who gave the orders for the police barricade to be lifted.

In response to CHP's events yesterday, Erdoğan said, "It wasn't an alternative celebration; it was an attempt at provocation. The public is what protects the republic. Kılıçdaroğlu is simply following after illegal organizations. If you are in favor of unity and solidarity then you should have been here with us. He used to sit here with us. What happened this year that made him go to Ulus?"

Prime Minister Erdoğan went on to explain that there are eight different locations to stage rallies in Ankara, however Kılıçdaroğlu insisted on Ulus. "There were 11 police officers wounded in the events that took place. However, the media doesn't show the injured police officers, they only show the pressurized water and tear gas," stated Erdoğan.