Republic Day celebrated on the Bosphorus 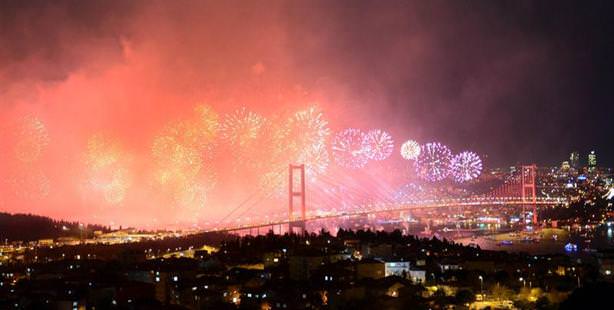 The 89th anniversary of the founding of the Turkish Republic was celebrated yesterday throughout the country.

A stunning light and fireworks show was presented along the Bosphorus Strait in Istanbul for the official October 29th Republic Day. Thousands came out to the Bosphorus to witness the marvelous visual display which lasted for approximately 30 minutes.

At 19:00, the show kicked off with a series of colorful lights shining from the Bosphorus and Fatih Sultan Mehmet Bridges. After approximately an hour of a light and color display representing the Turkish flag, the long-awaited hour of eight p.m. approached and suddenly the Bosphorus Bridge was alight in an extravagant fireworks show. Thousands came out to witness the unique fireworks display which was made to represent the Turkish flag's crescent and star.

The Bosphorus fireworks and light show celebration last night followed a series of ceremonies held in the city throughout the day. Marches were held in Taksim and Balmumcu. A torchlight procession was also held in Kadıköy's Bağdat Street.

This is a translation of an article originally written by Recai Kömür and Şuheda Aykut.

To see a photo gallery of the fireworks display, click: english.sabah.com.tr/multimedya/gallery/National/republic-day-celebrated-with-fireworks-on-the-bosphorus