The EU takes a turn towards Turkey 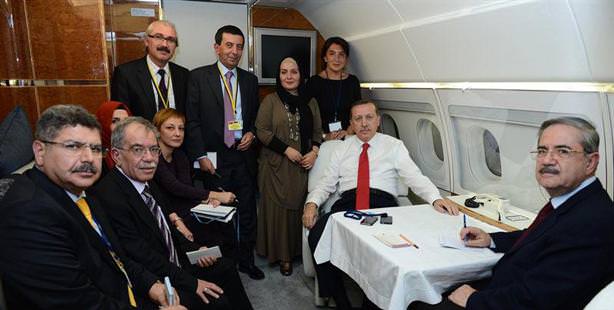 Upon Prime Minister Erdoğan’s return from Germany, he delivered the message that relations with the EU were on the road to normalization. Referring to the Sarkozy era as the “lost years”, Erdoğan underlined Merkel’s affirmative stance.

The trip went extremely well as Chancellor Merkel and other German officials embraced an extremely positive and constructive stance across from the ever-so-confident Erdoğan. Upon his return, members of the press had the chance to attend an "airplane chat" with the prime minister, an event which has now become somewhat of a tradition.

The following are a series of messages delivered by the prime minister on the nation's interior and foreign policy:

* There was a positive air in Germany. How do you feel your trip went?

"We'll see…Because I can't say anything until we have reaped results.
I felt that Chancellor Merkel was more positive this time. At least we were able to relay certain orders to our ministers. Those include the orders we gave our interior ministers regarding the separatist terrorist organization. There was also the order we gave regarding visa requirements… Also in regards to founding Turkish-German universities in Turkey or its equivalent in Germany…"

* Merkel is planning to visit Turkey in 2013. Is there a chance of Turkish-EU relations achieving a positive momentum?

"That is our expectation. On November 30th, both Germany's and Turkey's foreign affairs ministers will be meeting. We want to establish a strategic council-like platform between the two nations and are hoping to carry relations to a peak during Merkel's visit which will transpire later. When it comes to the EU, I perceived Merkel's actions and attitude to be more positive than periods in the past. She didn't defend the privileged membership option for Turkey during the press conference, which is something in the past she used to emphasize. This is because the previous French administration is no longer. We were not able to make any progress when Sarkozy was in power. He never had a positive approach to Turkey and those years were literally lost ones."

YOU WILL REAP WHAT YOU SOW

During a joint press conference with his Moldovan counterpart Vladimir Filat, Prime Minister Erdoğan issued harsh criticism to BDP, the Kurdish nationalist opposition party, in regards to the ongoing hunger strike staged by inmates throughout the country. Commenting on BDP Chairman Demirtaş's warning that the hunger strike could turn into a "radical event", Erdoğan stated, "I have a hard time understanding these sorts of announcements being made by the chairman of a party in the parliament. This is because they are practically using the language of an extension of the terrorist organization. This individual who says that events are going to turn radical has already gone so far as to threaten this nation's schools and absolutely has no idea about democracy or liberties. These are the types of people that have no part in humanity to the point of even attempting to set a university in Hakkâri on fire.

What are you going to do to become more radical? You will reap what you sow at every step. Either come and conduct politics at Turkey's Grand National Assembly or go up to Kandil," stated the prime minister.

As for the hunger strike itself, Erdoğan stated, "Every preventative measure has been taken. The death fast is over. There is no such thing at present. Those who are inciting the hunger strike continue to spend their days feasting on lamb kebab."

This is a translation of an article originally written by Tulu Gümüştekin Terzioğlu.