“There is no true opposition in Turkey” 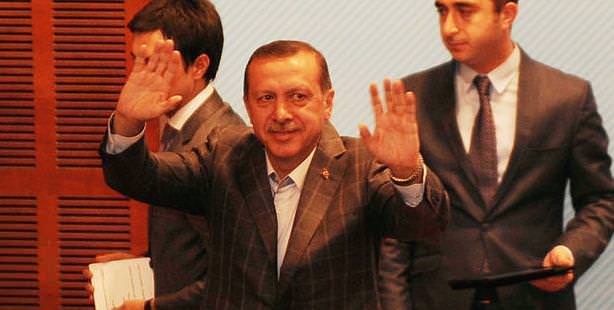 Speaking at an annual AK Party meeting, Erdoğan expressed that it was both their ill-fate as well as fortunate that there is no true opposition in Turkey.

NATION COOLS OFF AGAINST DEMOCRACY: "As Turkey begins to normalize, liberalize and head down the path to advanced democracy intolerance of all of these factors has also increased.
For someone to not want the same democracy, freedoms and rights for others that they demand for themselves is not it any way democracy. They are the exploiters of democracy. Therefore those that have been subjected to discrimination or oppression as a result of these people have now cooled off from democracy themselves.

COMMENTING IS FUTILE: The Chairman of MHP (the nationalist opposition party) Devlet Bahçeli says that they have mentioned the 2023 vision concept in the past. He is trying to make some sort of claim of possession and is directing allegations at the AK Party. It is futile to even comment on such a superficial and shallow way of comprehending.

Even in their dreams, other parties couldn't come close to the tangible projects, activities and investments the AK Party has put forth in their vision. Even if they were able to comprehend the 2023 objective concept, it would be impossible for them to compete with it. If you truly have the patent for the 2023 vision, then name the price and we'll pay you for it.

WE NEED 120,000 TEACHERS: Up until now, we have appointed 358,000 teachers, with 57,000 appointed this year alone. In fact, there are some schools where we have still been unable to completely fulfill their needs. We need 120,000 additional teachers. Making up for the lacking in staff will be dependent on our what our budget allows.

CENSURE MOTIONS DILUTE DEMOCRACY: Motions to censure are serious mechanisms of supervision. In fact they can be such significant supervisory measures as to lead to the downfall of a government or to holding general elections. This mechanism has been watered down by the opposition to an incomprehensible extent. Over the past ten years, the Turkish Grand National Assembly has received a total 41 censure motions from opposition parties.

OUR FORTUNATE OPPOSITION: When we look at just the past six censure motion proposals, the true tragicomedy of it all is evident. Is it even possible that the manner of broadcasting by both TRT and AA (state-run, television and press agency) could become the subject of a censure motion? What about a censure motion on security in schools due to the transition to the 4+4+4 systems?
Believe me, in Turkey there is a serious opposition issue in Turkey. Our ill fate is that there is no true opposition in Turkey. However, on the one hand it is also fortunate. We say let them go ahead and like this sort of opposition and we will just continue on our path.

NO METAL FATIGUE HERE: With ten years in power behind us, the AK Party is in no way experiencing 'metal fatigue' as some may have expected. Quite the contrary, our excitement, our dynamism and our productivity are at least as energetic as the day we came into power."