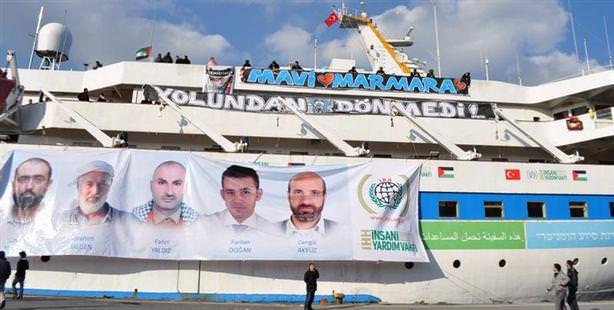 The trial of four Israeli commanders for the Mavi Marmara raid, which resulted in the deaths of nine Turks, begins today with hundreds of complainants from 37 different nations.

On May 31st, 2010, the Mavi Marmara vessel was destined for Gaza to deliver humanitarian aid when Israeli forces raided the ship killing nine Turkish peace activists. Today marks the first hearing of a trial by Turkey on four Israeli commanders responsible for staging and orchestrating the attack. Former Chief of Staff Gen. Gabi Ashkenazi, former Naval Forces Commander Eliezer Alfred Marom, former Military Intelligence chief Maj. Gen. Amos Yadlinir and former Air Forces Intelligence head Brig. Gen. Avishai Levi face trial today. The hearing, which will be held at the Çağlayan Court and has an extensive number of complainants hailing from 37 different countries, is considered to be "the biggest international trial to date."

According to Humanitarian Aid Foundation (İHH) Executive Board Member Gülden Sönmez, today's hearing, "sets a precedent for being the first time Israel is being made accountable on a judicial level."
The 109-page indictment prepared by Istanbul Public Prosecutor Mehmet Akif Ekinci charges the four Israeli commanders with 'voluntary manslaughter, attempted manslaughter, premeditated harm, voluntary harm, premeditated looting, the abduction of a maritime or railroad vessel, premeditated property damage and deprivation of freedom and torture.' The indictment seeks nine aggravated life sentences in addition to 8,578 and 18,031 years imprisonment.

NETANYAHU MAY BE NEXT!

Explaining that there are 490 plaintiffs in the case, Sönmez reminded of a case in which an Israeli soldier forced to take part in the Mavi Marmara raid filed a 200,000 dollar compensation case against the Israeli government for impeding on his ability to leave the country as well as his future career plans.