“We have no plans to purchase Patriot missiles” 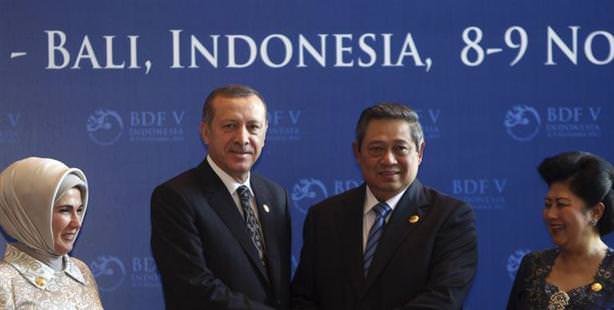 Refuting news reports that Turkey plans on purchasing Patriot’s from the U.S., Erdoğan said that they have also made no such requests for missiles to be stationed along the border with Syria to NATO.

Prime Minister Tayyip Erdoğan has rejected claims that Turkey plans to purchase Patriot missiles from the States to secure the Syrian border in Turkey. Erdoğan also stated "We have also not requested NATO to deploy missiles along the border, these allegations are baseless."

While in Indonesia, Prime Minister Erdoğan was asked to comment on news reports released by foreign media outlets that an official from Turkey's Foreign Ministry has announced plans to present on official request to NATO to deploy Patriot missiles along the Syrian border in Turkey as well as the claim made by one newspaper that Turkey is in talks to purchase Patriots from the United States.

Denying both the Foreign Ministry announcement and the news report allegations, Erdoğan went on to state the following:

'THE CLAIMS ARE BASELESS'

"We have not made any request to NATO to station missiles along the border. These claims are baseless. Who is this Foreign Ministry official? The Foreign Ministry official has no authority to release statements. We are the ones to make these decisions. I am not aware of any such situation. I am the President of the Defense Industry Executive Council. Then there is the Minister of National Defense and the Chief of the General Staff. All three of us need to be informed. Neither of us are aware of any of this. These are fabricated reports. The NATO Secretary General has stated that if a request was made they would approach it affirmatively; however we have not made any such request thus far. We do not have any thought of paying money to purchase Patriots at the moment," Erdoğan told journalists in Bali where he was set to take part in the Bali Democracy Forum.

The source of the surfacing of news reports surrounding the request for Patriot missiles, which has since been refuted by Prime Minister Erdoğan, has since surfaced to light. With the downing of a Turkish F-4 fighter jet by Syria earlier in the summer, followed by the shelling of the Turkish border town of Akçakale by Syria, Turkey had requested NATO update their military plans regarding Syria. Ankara had emphasized that the civil war in Syria has brought up the need to revisit their perception of security along the Turkish-Syrian border, which Turkey reminded is also NATO's Southeast border during meetings to discuss the fourth article of the NATO agreement. Therefore, Ankara has sent the message to NATO to be prepared by way of updating their military probability plans, including their air defense system, in the case a request is made for assistance in the future.