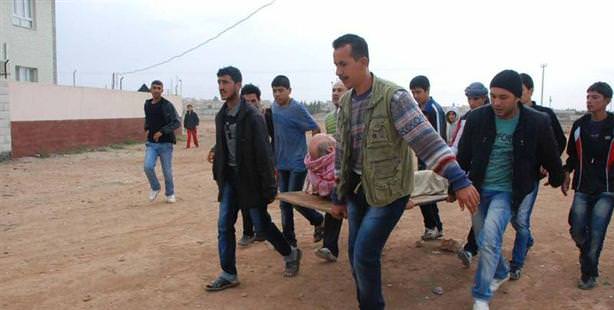 As the number of Syrians seeking refuge from the violence in Syria’s Rasulayn district increase exponentially, stray gunfire from the conflict has injured five people in the Ceylanpınar district in Turkey’s southeastern province of Şanlıurfa.

Conflict has intensified in the Rasulayn district of Syria's al-Hasakah province after fierce clashes broke out between Syrian opposition fighters and regime forces, both battling for control of a region in the far northeastern corner of the country. Syrian's have been crossing the border into Turkey to enter the town of Ceylanpınar, a district bordering Syria in the southeastern province Şanlıurfa. Situated just a few hundred meters from Rasulayn, residents of Ceylanpınar could hear the sound of mortar fire and intense shooting across the border which has caused widespread panic in the region and injured five local residents.

As security measures were intensified in the region, school was cancelled yesterday for two days. Local authorities and police made announcements on speakers warning citizens to avoid the border area. The stray gunfire from Syria hit a total of five Turkish citizens Ömer Vel, who was walking with a friend on Gazi Street and Halime İnce who was hit in the Barış neighborhood. Ayten Akan, a 15 year-old girl, was struck by a stray bullet in her left ankle. Akan explains that when she heard sounds of shooting she went outside and then felt pain in her ankle. A number of homes were also damaged in the Cumhuriyet neighborhood.

Eight Syrians wounded in the conflict in Rasulayn were taken to Ceylanpınar for treatment. The wounded were brought into Turkey by close relatives and admitted to the Ceylanpınar State Hospital. A number of the wounded are stated to be in life-threatening condition.

Meanwhile, a number of Syrians have entered Ceylanpınar to escape the violence in Rasulayn. Upon their arrival, the Syrian refugees which included women, children and the elderly, were taken by bus to the Telhamut Tent City. The Telhamut camp has been equipped with additional containers brought in from Van. According to Turkey's Disaster and Emergency Management Presidency (AFAD) the number of Syrian refugees in Turkey has reached 122,179.

MISSILE LAUNCHERS DEPLOYED TO THE REGION

Turkish security forces have increased their presence and security measures along the border. Including armored vehicles, missile launchers were also brought in to Ceylanpınar and stationed nearby a camp housing Syrian refugees.

Howitzer's that were deployed to the Akçakale and Kobani borders have now been repositioned along the Ceylanpınar border. A majority of homes along the border have been evacuated and a three kilometer-long barricade was set up using train wagons along the Turkish border with Syria.

This is a translation of an article originally written by Ekren Arslan and Mehmet Yıldırım.