UN no longer facilitates justice in the world 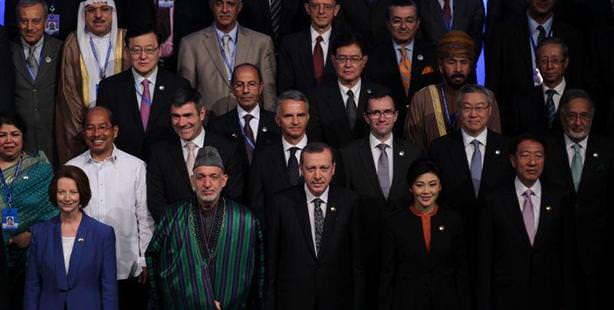 Speaking of reform to both the UN and the IMF during the Fifth Democracy Forum in Bali, Prime Minister Erdoğan stated, “The UN structure must be altered. The fate of the world cannot be left up to what five members say.”

Prime Minster Tayyip Erdoğan offered a lesson on "democracy and global justice" during an opening address for the Fifth Bali Democracy Forum in Indonesia. Emphasizing the need for reform in the UN, Erdoğan criticized its ineffectiveness in solving global issues. "The UN must be restructured in order to represent all of humanity. The fate of the world cannot be left up to the UN's five permanent members," stated Erdoğan.

Prime Minister Erdoğan, who also expressed the need for reform of the IMF, delivered the following messages in his influential speech:

THE RULES HAVE CHANGED

"We see that today, we need a whole new way of accounting, with democracy at the forefront. The perception of globalization has changed the rules of the game from the core, from economics to politics and from social life to culture. We are obliged to utilize the dynamics of this transformation, by comprehending them in the right way and applying them to our democratic systems accordingly.

It is an unavoidable reality that in this day and age democratic processes need to be transparent, encompassing, including minority rights and based on the superiority of the state. Developed western economies and social state models have been seriously rattled in the global crisis.

The increased unreliability felt towards democratic structures, leads the way to a drop in participation in elections as well as allowing extremists to influence the entire political system. This needs to not be turned into a crisis of values.

We see that unfortunately the UN Security Council has been ineffective in solving the tests of global structuring put forth by Syria, Somalia and Myanmar. This situation obliterates the effectiveness and legitimacy of global structures. The UN is no longer able to display leadership in addressing the fears that threaten the future of humanity.

The fate of the world cannot be left up to what the five permanent members of the UN Security Council have to say. In this case, humanity would continue to bleed. Syria is killing people with bombs. Meanwhile, the UN only pays heed to the decision that will be made by its five permanent members. We believe that the United Nations needs to be restructured in a way that will allow it to ensure the rights of the whole of humanity will be organized around the principles of justice and equality. The UN and its Security Council needs to have representatives from all off humanity, from every continent and from all religious faiths. The UN needs to renew its vision and structure.

The fact that the Syrian regime, encouraged by the UN blockade, continues to massacre its own people is a source of shame for humanity. To remain silent in the face of this humanitarian tragedy unfolding before our very eyes, which they attempt to justify as to not upset international balances will not assuage the conscience of humanity, nor will it relieve us of our responsibilities in the name of history.
Nobody should be able to live in peace in their own nations while others are suffering under dictatorship regimes in Syria, the Middle East or anywhere in the world. If there is anyone who believes that the global system can function indifferently and can benefit from the benefaction of democracy as this painful situation ensues they are gravely mistaken.

We also believe that the IMF needs to undergo a similar process of extensive reform. Reform in global economic institutions should address injustices in global income distribution as a priority."

During the Democracy Forum in Bali, Prime Minister Recep Tayyip Erdoğan had the opportunity to speak with Iranian President Mahmoud Ahmadinejad. Although the meeting was unscheduled and unannounced, the two supposedly discussed the Syrian crisis. Erdoğan and Ahmadinejad last met approximately a month ago in Azerbaijan where the situation in Syria was also the focus of the discussion.

During the forum, Brunei Sultan and one of the richest people in the world, Hassan al-Bolkiah invited Prime Minister Erdoğan to pay a visit to Darussalam. "You have come all this way. It would make me very happy to be able to host you in my country," Bolkiah said.

Erdoğan accepted the invitation by Bolkiah, who had visited Turkey in spring, and will be heading to Brunei as soon as the Bali forum comes to a close and has delayed his return to Turkey to November 11th.