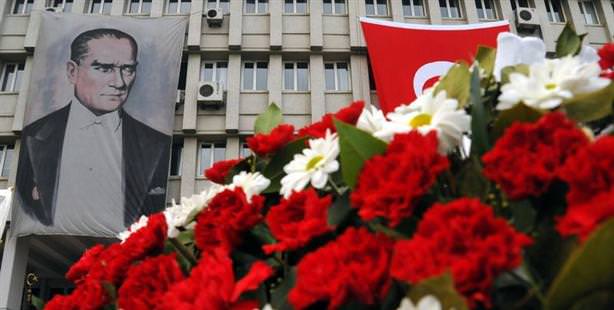 In his message, President Gül said that Atatürk, who was able to understand the way the world was going and wholeheartedly believed that the public had the right to determine their own future, was the one who laid the foundation for the republican regime to transition to a democratic method of administration.
The President went on to state the following: "Atatürk won the respect of the world by being a visionary, a man of peace, reforms and someone who knew the world well, for his diplomacy and his political vision. Having devoted his life to his country, Atatürk was a courageous man of action. With his military brilliance on the battlefields, and his democratic vision of politics, he opened up Turkey's horizon. He gave his all to establish Turkey as a modern nation with a strong future and continued determinedly on that path."

Prime Minister Recep Tayyip Erdoğan also released a message in honor of the anniversary of Atatürk death referring to the leader of the struggle for independence for his military excellence and his legendary fight which he crowned with victory thereby becoming a commendable leader who has gained the approval of this glorious nation and the entire world.

In his message, Erdoğan went on to state: Our Republic to which Atatürk refers to as 'my greatest legacy' has remained standing upright for the past 89 years despite all of the calamities experienced and continues confidently to head towards a bright future in the sure hands of the current administration."