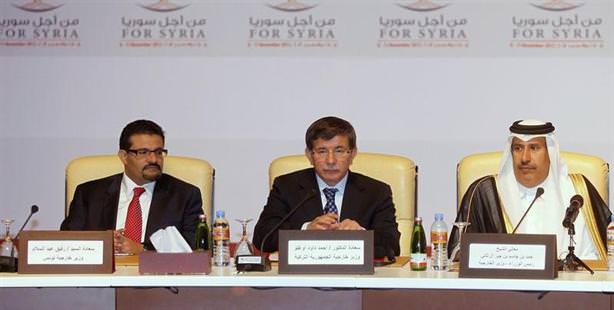 At the end of a seven day meeting in Doha, Syrian opposition leaders struck a hard-won deal on Sunday to form a broad new coalition.

After more than a week of meetings in the capital of Qatar, attended by various members of Syrian opposition groups as well as Turkey, the decision was reached under intense international pressure to form a new coalition, in which all members of the Syrian opposition will be collected under a single umbrella, titled the Syrian National Coalition for Opposition and Revolutionary Forces.

Mouaz al-Khatib, a 52 year-old former imam at the famous Umayyad mosque in Damascus, was voted as president. Khatib, an Islamist moderate who fled Syria in July, is a soft-spoken preacher who reached out to minorities early in the revolt. He was also arrested a number of times for his critics of Assad during the past 20 months of conflict. "(Khatib) is from Damascus and is a famous man from there. I think this is a serious step against the regime, and a serious step towards freedom," said George Sabra, head of the Syrian National Council that U.S. and Qatari officials spent last week persuading to accept the creation of a more inclusive new body.

Riad Seif, a veteran dissident, and female activist Suhair al-Atassi were chosen as deputies to The Syrian National Coalition President Khatib. Mustafa Sabbagh was elected as Secretary General. Sabra also praised the choices of Seif and Atassi to the new body, "They are very good representatives of this project. They are activists in our revolution. Most of them have made large sacrifices for the people inside the country."

Under the agreement outlined during the meeting in Doha, in which both the new Syrian National Council President George Sabra and the Syria Revolutionary Council Chief Heysem Malih also attended, Syrian opposition groups will have seats in an assembly of 55 to 60 members under a president, two deputies and a secretary general, all of whom were elected later on Sunday. It is this assembly that is envisaged to later form a transitional government in Syria.

According to the joint understanding, membership to the Syrian National Coalition for Opposition and Revolutionary Forces will be open to all opposition groups; however no sides will be allowed to engage in dialogue in any way with the Syrian regime. The new body will seek to become the sole address for military and humanitarian aid to Syria.

Once the coalition gains international recognition they will begin forming a transitional government and a national congress, after which the duty of the Syrian National Coalition for Opposition and Revolutionary Forces will have come to a close.

Once the consensus was reached amongst the opposition, Foreign Affairs Minister Ahmet Davutoğlu headed straight for Qatar. Noting that they have been closely following the developments, Foreign Minister Davutoğlu stated,

"Last night I spoke with the Qatari Prime Minister Sheikh Hamad bin Jassem al-Thani and Foreign Affairs Minister Sheikh Hamad bin Jassim again. There were some issues that needed going over. As Turkey, we have contributed through both our committee that attended the meetings as well as through the meetings we held in Turkey. We had to be there because this is a process that we helped fruition. Foreign Minister Davutoğlu said the formation of the National Coalition meant the opposition was no longer divided. "The friends of Syria... should support this agreement... There is no excuse anymore," Ahmet Davutoğlu said. "All those who support the rightful struggle of the Syrian people should declare clear support for this agreement and be more active."

The Turkish committee that attended the seven-day deliberations in Doha was lead by Ambassador Ömer Önhon, who said that the majority of the alliance groups complied with the decision and Turkey exerted maximum efforts for the compromise to be reached.

Former Syrian Prime Minister Riyad Hijab, who surprising defected to Jordan in August, says that the agreement reached in Doha will expedite the downfall of the Syrian regime.

New SNC President is against violence

The Syrian National Council elected George Sabra, a Christian former Communist Party member as President on Friday. The 65 year-old Sabra who also wrote for the Arabic version of Sesame Street, spent eight years in a military penitentiary for his opposition of Assad. As soon as the uprising against Assad began to heat up in Syria, Sabra fled to Paris for fear of arrest and therefore has not participated in any way in the ongoing violence in Syria. The retired geography teacher Sabra received support from all Syrian opposition groups in taking over the position from Abdülbasit Seyda.

Israel fired a guided missile into Syria on Sunday in a potent "warning shot" after mortar fire from fighting between Syrian troops and rebels hit the Israeli-occupied Golan Heights for the second time in four days. Although they are technically still at war, this is the first direct engagement of the Syrian military on the Golan since the countries' 1973 war. Israeli Prime Minister Benjamin Netanyahu has expressed that Israel will respond immediately and severely to any missile falling within the Israeli border.
Meanwhile, in operations staged by Syrian forces throughout the country yesterday 11 people were killed, while 88 were killed the day prior.

A Syrian warplane bombed the rebel-held town of Ras al-Ain on Monday, just meters from the Turkish frontier, sending scores of civilians fleeing for safety into Turkey. Helicopters also strafed targets near the town, which fell to rebels on Thursday during an advance into Syria's mixed Arab and Kurdish northeast. There was no word on casualties.

The jet struck within meters of the border fence that divides Ras al-Ain from the Turkish settlement of Ceylanpınar, sending up plumes of black smoke. As thousands of Syrian civilians fled the area, scrambling over the fence into Turkey, the Syrian regime helicopters set fire to the wheat silos in the city.