PM Erdoğan: “We stand with our brothers in Gaza” 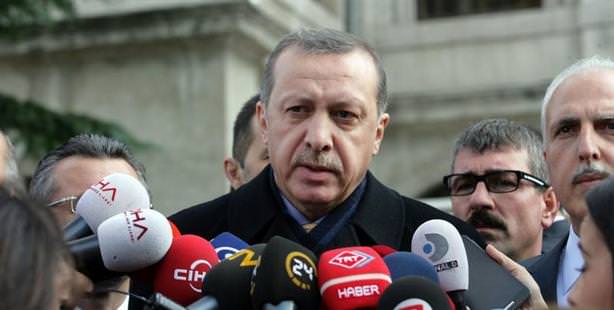 Erdoğan strongly denounced what he referred to as Israel’s “barbaric” election tactics and said "We will defend Gaza whatever it costs us."

Prime Minister Tayyip Erdoğan decried Israeli's air strikes on Gaza on Friday as a pre-election stunt and said he would discuss the crisis with Egyptian President Mohamed Mursi in Cairo this weekend. Erdoğan said he would speak by phone with U.S. President Barack Obama later on Friday and that Ankara was also seeking talks with Russian President Vladimir Putin amid the prospect of a full Israeli ground invasion.

Prime Minister Recep Tayyip Erdoğan, in his first remarks about the recent Israeli attacks on Gaza, strongly denounced Israel and linked what he called Israel's "barbaric position" to election tactics. He also recalled that Operation Cast Lead had been launched in the lead up to an Israeli election just days after Turkey had brokered a deal between Israel and Syria. Erdoğan reminded that 1,500 Gazans were killed from Israeli strikes in 2008 and 5,000 were wounded.

"As you know, there will be an election next month in Israel. And, as you see, Israel has started pounding innocent people in Gaza with bombs once again based on fabricated reasons," Erdoğan told reporters.

"The dominant world powers are now making the Gaza people and fighters pay, and as the Republic of Turkey we are with our brothers in Gaza and their just cause. We will defend Gaza whatever it costs us," stated Erdoğan.

"Israel continues to try to defend its actions behind setting off hundreds of missiles. If you ask how many deaths there have actually been well they would say three. However what about the other side? There are at least 21 deaths and over 100 wounded. Of course the destruction in Gaza is a whole other issue. Yet Israel continues to strike and perpetuates its savage stance."

I hope that either through a decision by the U.N. Security Council or a change in attitude by the world's dominant powers, Israel's offensive stance will come to an end," Erdoğan said.

When one reporter asked, "How will this issue affect relations with Israel?" Erdoğan responded by stating, "We don't have a relationship with Israel, therefore what relations are you referring to?

As for who should speak to Israel… The ideal place to communicate with Israel is at the U.N. Security Council. Nations that have relations with Israel, are the ones that should speak with them," stated Erdoğan.