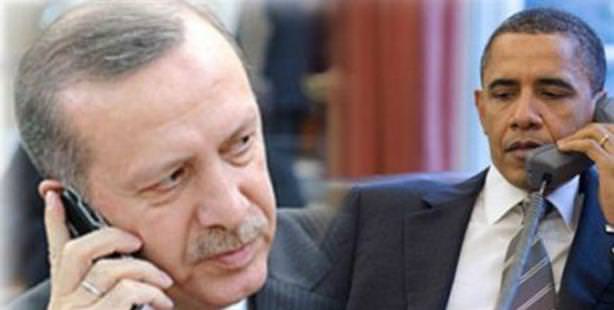 Speaking on the phone to U.S. President Obama, Prime Minister Erdoğan, said, “You must contribute to bringing an end to these attacks.” Obama in return requested assistance regarding Hamas.

A CONSENSUS FOR PEACE

According to information from Prime Ministry sources, the two leaders expressed their concern regarding the ongoing tension endangering the Palestinian peace process and regional stability.

Prime Minister Erdoğan and President Obama reached a consensus on the necessity for the urgent halt to these recent clashes in order to ensure the ongoing tension does not escalate and agreed to cooperate in order to mediate a ceasefire.

During the conversation, Prime Minister Erdoğan requested Obama's assistance to stop Israeli attacks on Gaza and stated, "Whether you discuss the issue with Israel or through other contacts, you must contribute to putting a halt to these attacks."

Obama in return, responded by stating that he had already spoken with Israeli Prime Minister Benjamin Netanyahu and told him that the conflict needs to come to an end.

The U.S. President ensured Erdoğan that he would continue to exert efforts to this effect, while also requesting the Prime Minister assist with Hamas and Egypt. According to information obtained, Obama emphasized the importance of Erdoğan's trip to Egypt which begins today. Obama requested that Erdoğan exert efforts to pacify Egypt and Hamas during his trip in order to prevent the conflict from widening.

Obama also emphasized Israel's right to self defense and supposedly expressed to Erdoğan that Hamas needs to stop releasing missiles and rockets on Israel.

After speaking with President Obama, Erdoğan also held a telephone conversation with Russian President Vladimir Putin. According to information obtained from a Prime Ministry source, during the meeting, Putin and Erdoğan exchanged views and emphasized the importance of a ceasefire to ensure the situation does not escalate. During Erdoğan and Putin's discussion, the two exchanged information regarding the situation in Gaza and also expressed how pleased they were to be able to meet in Istanbul for the December 3rd, 2012 Turkey-Russia High Level Cooperation Council meeting.