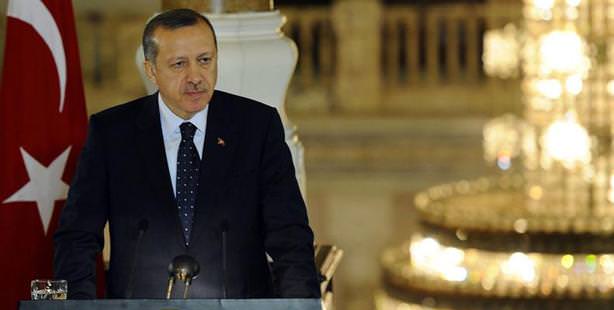 Prime Minister Erdoğan vowed support for Palestinians and said that sooner or later, Israel will pay the price for killing innocent children in Gaza.

Prime Minister Recep Tayyip Erdoğan delivered a speech at Cairo University on Saturday where he was greeted with "Raise your head up high, you are Egyptian," chanted by students and others in the hall that included officials and dignitaries. "Egypt and Turkey are hand-in-hand," they chanted.

Prime Minister Erdoğan, an outspoken of critic of Israel, praised Egyptian President Mohamed Mursi, on Saturday for recalling his ambassador from Tel Aviv in response to Israeli attacks on Gaza.

Egypt, which in 1979 became the first Arab state to sign a peace treaty with Israel, recalled its envoy on Wednesday hours after Israel launched an air campaign on Gaza. Turkey withdrew its ambassador over a separate incident with Israel in 2010.

"I congratulate my brother Mursi who recalled the Egypt ambassador in Israel after recent incidents," Erdoğan said. "Turkey will continue to fight before the international community for our Palestinian brothers," Prime Minister Erdoğan went on to state, adding, "I congratulate Egypt's youth and people for your revolution."

Prime Minister Erdoğan also said Turkey wished to see a ceasefire and that world powers were not halting Israel's attacks. "The party with the disproportionate force is obvious," he said. "Israel will have to pay the price for killing innocent children in Gaza. Israel is using disproportionate force. Netanyahu proceeds with these kinds of actions all thanks to international negligence," Erdoğan told an enthusiastic audience during his speech at Cairo University.

Prime Minister Erdoğan reiterated his call for a ceasefire between Israel and Hamas during a joint press conference with Egyptian President Mohamed Mursi and criticized the international community for its inaction on the matter.

"What re webeing told? To tell Hamas to stop firing rockets… Are the lives of Israeli's worth more than those of Gazans? We want justice andthese attacks should stop immediately," stated Ersdogan.
Erdoğan also criticized the United Nations by repeating his sentiments that the Security Council operates only according to the directives of its five leader nations.

Egyptian President Morsi said on Saturday there were "some indications" a ceasefire could be reached soon between Israel and Gaza Palestinians but he had no firm guarantees.

"There are some indications that there is a possibility of a ceasefire soon, but we do not yet have firm guarantees," Mursi stated during the joint news conference with Prime Minister Tayyip Erdoğan.

"We are striving with all seriousness to stop this aggression, to reach a ceasefire. We call on everyone to adhere to what has been agreed upon, and we hope for an agreement on that at the earliest opportunity," said Mursi. He said Egypt was working with a number of countries to achieve a truce, including Turkey Arab states, Western nations and Russia.

Israeli aircraft bombed government buildings in Hamas-controlled Gaza and its "Iron Dome" defense system shot down a Tel Aviv-bound rocket on Saturday as Israel geared up for a possible ground invasion.

"If a land invasion happens, as some say, that forebodes terrible consequences in the region," said Mursi.

"We will continue to take steps with Egypt in regards to the Syria crisis," Erdoğan said.

Prime Minister Erdoğan also repeated that Turkey was ready for closer business ties with Egypt, whose economy has been pummelled by the turmoil that followed Mubarak's overthrow.