Al Fatah and Hamas need to act together 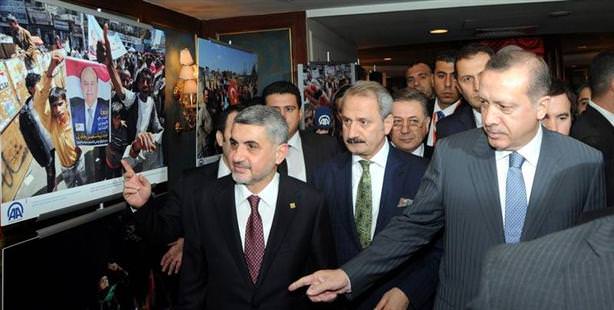 Calling for a ceasefire between Israel and Gaza during his trip to Egypt, Prime Minister Erdoğan addressed Netanyahu by stating, “We are not in 2008 anymore; do your calculations well.” Erdoğan also called on Hamas and al-Fatah to join forces by stating, “What is it that you cannot share.”

Speaking at the Turkey-Egypt Business Forum in Cairo on Sunday, Prime Minister Tayyip Erdoğan called on both sides to adhere to a ceasefire, and urged Hamas and Al Fatah to join forces. Criticizing calls by western powers for Hamas to halt their fire, Erdoğan directed a question at U.S. President Obama stating, "Are the lives of Israeli's that much more valuable than those of the Gazans?"

During his address, Erdoğan went on to state the following:

IF I ONLY COULD HAVE GONE TO GAZA

"Our Gazan brothers are being rained down on with bombs right next to us in Gaza. My brother Kandil (Erdoğan's Egyptian counterpart) went to Gaza in that atmosphere. And I of course had to ask him how the situation was there. I wish we could have gone together and maybe one day we will.

Having broken off all previous ceasefire agreements made in Egypt and in tune with their own history, Israel continues to use Gaza's retaliation rocket strikes as an excuse for their assault. Three Israeli deaths are made out to be 300 or 3,000. However, on the one hand the death of 50 Palestinians is being depicted as it were just five. They do not even acknowledge the 500 or 600 wounded and ignore the fact they have leveled Gaza. Unfortunately, this is Israel's characteristic structure, it's in their nature.

Didn't they do the same thing to us? Didn't they attack a ship carrying passengers from over 30 different countries delivering humanitarian aid? Didn't we lose nine martyrs? We did. Five bullets were recovered from our darling child Furkan alone, one of which was shot right in between his eyebrows. Who is it that is responsible for this? Israel. This is Israel. You saw the baby our brother Ismail Haniyeh held in his arms. They are ruthless enough to kill a nine-month old child.

I told the Israeli president in Davos, 'you know how to kill children very well. Because you do not have any form of justice. They have made it their ideal to rise through oppression, cruelty and crushing others.

They seem to be staging these attacks periodically. They did it prior to the 2008 elections. There were 1,500 victims in Gaza at that time. Now an election is approaching again and they are staging the same rehearsal. I am addressing Netanyahu: "We are no longer in 2008. This is 2012. You should know that the conditions in 2012 are not like those in 2008, you need to do your calculations well.

I spoke to both Obama and Putin and told them, 'come let's announce a ceasefire and put an end to this.' You convince the Israeli side and we will speak with Hamas in order to put this into effect as soon as possible. If they are sincere, then a duty befalls the leading powers. I am no longer expecting much from the United Nations. The U.N. Security Council, which was formed in order to establish international justice, is now dependent on the directives of its five permanent leaders. Unfortunately, no step has yet been taken to rectify this. We made such a request from Obama, however yesterday Israel continued to bomb. What is being said? 'You tell Hamas to stop shooting rockets.' Are the lives of Israelis that much more valuable than those of the Gazans?

We say let there be a simultaneous ceasefire. But they say Gaza needs to hold their fire first. Can there be such injustice? The issue is standing up against this. I am also calling on the Arab League. I am asking when your voice will be heard. We meet, sit and eat together and then we all disperse. I am saying the same thing to the Organization of Islamic Cooperation, what do you do? Therefore, a reform of these establishments is crucial.

Israel continues to gain strength by those who support them and those nations that pat their back. Therefore, we have to remain strong. Those who have intentions of playing dark scenarios in this region need to be aware that there are also nations such as Turkey, Egypt, Saudi Arabia, Qatar and the Gulf nations. Those who come out killing babies will see a strong will standing against them and they will have to adjust their steps accordingly.

A MESSAGE OF UNIFICATION

From here I am calling out to my Palestinian brothers. I am calling out to al-Fatah. As long as the Fatah-Hamas divide exists, the Palestinian issue will not be solved. What is it that you cannot share? What is it that you cannot work out? If you believe in yourselves, then bring out the ballot box and go to an election. Then surrender yourselves over to whoever wins the election in Palestine. However, with the support from somewhere, these two continue to protect their own interests. What happens then? You protect your own interests, however does the U.N. General Assembly then say, 'Come on, we are behind you, we have accepted you as a state.'

All the western powers are interested in is tearing apart the Islamic world. While Israel sabotages the peace process for their own joy, no one in this region will be able to have security, stability or peace.


I am addressing both the Israeli administration as well as Gaza. First, there needs to be an immediate ceasefire… And it needs to take place within 24 hours. Neither side would gain from prolonging it further. Secondly, the conditions that were present in 2008 no longer exist today. Thirdly, all embargos need to be gradually lifted in order for the region to prosper. We feel that this needs to happen soon with talks beginning within the next 90 days."

While in Cairo Prime Minister Recep Tayyip Erdoğan participated in the opening of an 80-photograph exhibition held by Anadolu Agency entitled "Arab Awakening." Erdoğan was joined by Egyptian Prime Minister Hashem Kandil while they toured the exhibit and AA Executive Board Chairman and General Manager Kemal Öztürk relayed information to the two prime ministers on the photographs in the exhibit.