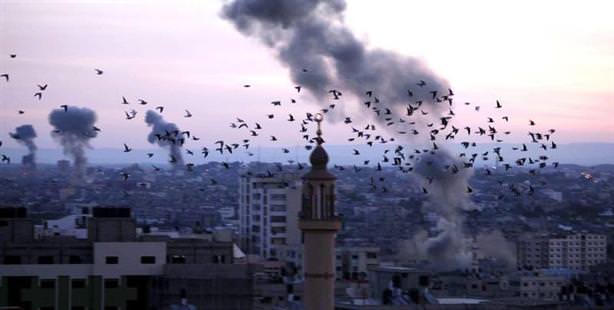 Foreign Affairs Minister Ahmet Davutoğlu will be paying a visit to Gaza on Tuesday joined by nine fellow foreign Affairs ministers from the Arab League in a delegation led by Secretary-General Nabil Elaraby.

While in Egypt, Prime Minister Tayyip Erdoğan mentioned that Davutoğlu would be heading to Gaza to continue efforts to secure a ceasefire between Israel and Hamas. While in Gaza, Davutoğlu and his accompanying ministers are also expected to tour demolished sites and to visit the wounded.

U.S. President Obama also spoke with Israeli Prime Minister Netanyahu by phone. During the meeting which dealt with de-escalating the tension, Obama underlined that Hamas needs to put an end to staging rocket attacks on Israel.

EU foreign ministers have also expressed great concern for the situation between Gaza and Israel. According to EU foreign ministers, Israel has the right to defend themselves from these sorts of attacks however, Israel should act measurably in doing so and must always ensure the protection of civilians. .

"TURKEY SHOULD BE A GUARANTOR"

Speaking to Ha'Aretz on Sunday, former National Security Council Director and retired Major General Giora Eiland put forth an interesting proposal for a solution involving nations Egypt, Turkey and Qatar provide a guarantee of an end to Hamas' fire and weapons distribution. "The Israeli government will need to make political compromises in order to reach a security arrangement that will ensure the end of rocket fire from Gaza into Israel. This sort of agreement would include a mutual cease-fire and an Egyptian guarantee of not just quiet, but also that no weapons will enter Gaza, and would be guaranteed by additional parties, for example, Qatar and Turkey."

A number of nations have called on Israel to stop their assault on Gaza. China has advised for restraint on both sides while also announcing support for the diplomatic initiatives made by Russia and Egypt.