FM Davutoğlu: Turkey will never leave Gaza on its own 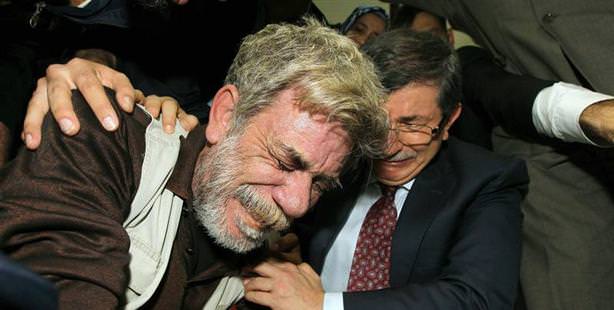 Speaking at an Arab League Foreign Ministers meeting in Gaza, Foreign Affairs Minister Ahmet Davutoğlu stated, "The future of Palestine is our future. We will continue to stand by your side until this occupation comes to an end.”

As the Israeli bombardment of Gaza continues, Foreign Affairs Minister Ahmet Davutoğlu delivered a message of solidarity to Palestinians.

Speaking from Gaza where he arrived as part of a delegation of Arab foreign ministers led by Arab League Secretary General Nabil Elaraby, Davutoğlu stated, "The future of Palestine is our future. We will continue to stand by your side until this occupation is over and Jerusalem is finally liberated."

Expressing that wounds have been opened in the hearts of 75 million in Anatolia due to the oppression suffered by Palestinians, Davutoğlu referred to this Gaza visit as a historical trip and said that he would be relaying greeting and messages from the 75 million people in Turkey as well as President Abdullah Gül and Prime Minister Tayyip Erdoğan.

While in Gaza, Davutoğlu stated the following:

WE WILL NOT LEAVE YOU ALONE: "Today we are in our homes and are here to share the troubles suffered by our own families. This is our message: No matter what happens, whatever pressure and oppression surfaces, our solidarity with you will never come to an end. You are not just fighting for your own honor; you are struggling for the honor of all of humanity. May God and all of humanity be witness; we will not leave you alone in this struggle."

YOUR PAIN IS OUR PAIN: "Your pain is our pain, your fate is our fate and your future is our future. You must know that the pain of every drop of blood shed is opening deep wounds in the hearts of the 75 million people residing in Anatolia. We will continue to stand by your side until hopefully this occupation is over and Jerusalem is finally liberated."

HISTORY WILL NOT FORGIVE YOU: "By paying a visit to Gaza with the Arab League Secretary General and foreign ministers from Arab League member nations, we wanted to deliver a message to the international community and the United Nations. I want to deliver the following message to the international community: You may remain silent to Israel's tyranny. You may even make announcements that legitimize Israeli oppression, however you should know the conscience of humanity and history itself will never forgive those who excuse Israel's cruelty. Know that we, the Arab world, Turkey and the Islamic world will continue to stand shoulder to shoulder against this injustice."

THE INHUMANE EMBARGO SHOULD BE LIFTED: "Israel needs to put an immediate halt to these attacks and at the same time must also end this inhumane embargo on Gaza. Israel should not be permitted to turn Gaza into an open-air prison. I also want this to be an acknowledgement of the martyrs who risked their lives on the Mavi Marmara in order to lift this inhumane blockade. Altogether, as humanity, the Arab world, the Islamic world and Turkey we will continue to struggle shoulder to shoulder in order to lift this blockade."

NEARLY MORNING: "Finally, I want to say this: I want our Palestinian brothers and our Gazan brothers to know that the darkest moment in the night is also the closest moment to the morning. The morning is near. We will awake together to days of liberation, upon which I entrust you to God."

While Davutoğlu was in Gaza, Israeli herons continued to release bombs on buildings and streets. Those killed and wounded in the bombings were taken to Şifa Hospital, where Foreign Minister Davutoğlu visited victims from Israeli attacks. Davutoğlu, who was also joined by Prime Minister Erdoğan's son Bilal Erdoğan, arrived to the hospital in the evening hours and visited Gazans wounded in the strikes. Davutoğlu also paid a visit of condolences to the remaining members of the Ed-Delu family which lost 12 members in an Israeli air strike on Gaza.

Making history for being the "first high-level Turkish official" to visit Gaza, Davutoğlu and the delegation of Arab foreign ministers were greeted by Palestinian officials at the border. Davutoğlu was welcomed enthusiastically by Gazan Palestinians who took to the streets in masses waving Turkish flags. Throughout Davutoğlu's route, Palestinians chanted slogans of support for Turkey and Davutoğlu himself.

THE VISIT THAT BROUGHT HIM TO TEARS

Foreign Affairs Minister Ahmet Davutoğlu also met with a number of Palestinian families that had lost members in Israeli attacks. Accompanied by his wife Sare Davutoğlu and Prime Minister Recep Tayyip Erdoğan's son Bilal Erdoğan during a visit to Gaza's Şifa Hospital, Davutoğlu offered his condolences and embraced the suffering Palestinians, and was even brought to tears upon witnessing a number of painful instances amongst the wounded. At times, Davutoğlu's sobbing resulted in dredging up emotions for those around him.

Foreign Minister Davutoğlu departed Şifa Hospital after making his rounds visiting the wounded. After Davutoğlu's departure, the Turkish journalists accompanying him boarded the bus that was waiting for them in front of the hospital. Just at that time two cameramen for al-Aqsa TV who were covering the hospital story, were killed as a result of an Israeli air raid. The strike also hit close to the vehicle transporting Turkish journalists.

Palestine's Ankara Ambassador Nebil Maruf recently stated that deploying Turkish and Egyptian soldiers to Gaza could be a solution to the conflict, while also ensuring security for Israel.

Meeting with media representatives in Ankara, Maruf stated that if Turkey and Egypt, as regional powers, were to station approximately 10-20 thousand soldiers in Gaza, the attacks would come to an end.

According to Maruf, if this were to transpire, it would be of benefit to both Israel as well as Palestine as Hamas would stop shooting rockets at Israel, there would no longer be a reason for weapons in the region and maritime access would be secured. Maruf says he is sure the United States and Israel will oppose this proposal; however he also purports that as regional powers, both Turkey and Egypt could convince these two nations otherwise. Maruf also noted that this proposal could be realized under the umbrella of the United Nations and reiterated, "This route would also provide security for Israelis."