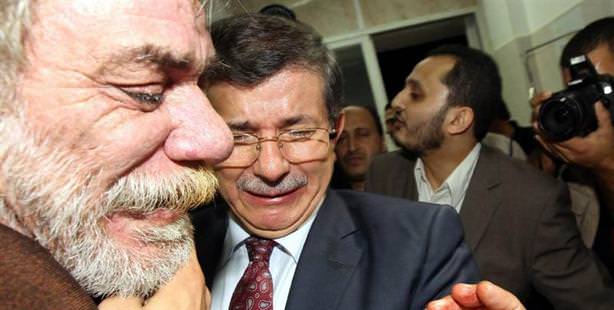 Calling the assault on Gaza the result of "Israel’s recklessness," Davutoğlu explained that the preliminary agreement drafted according to a proposal by Turkey for a ceasefire, did not fruition due to Israel’s obstinate stance.

Foreign Affairs Minister Ahmet Davutoğlu, who exerted great effort in order to ensure a ceasefire between Israel and Hamas, commented en route to Pakistan to attend a meeting of foreign minister for the D-8 summit by stating that it was Israel's stance that blocked the ceasefire agreement from being realized initially.

Remarking on the fact that Israel has once again failed to adhere to the agreement reached, Davutoğlu said, "We have seen this film before."

Davutoğlu was discussing the events that transpired the day prior leading to the ceasefire which went into effect between Hamas and Israel last night at 21:00.

Reminding that during the 2008 assault, there was a shuffle of diplomacy between Damascus and Cairo in order to secure an agreement, however once again due to Israel the deal fell through, Davutoğlu referred to Israel's persistent attacks even while Arab league foreign ministers were in Gaza as "evidence of their recklessness".

Davutoğlu stated, "There is now a ceasefire deal which both Hamas and Israel have for the most part agreed upon. This gives us hope. However, the fact that while these grounds have been established, the fact that Israeli air strikes persist is evident that Israel is taking certain tactical steps by attacking rather than heading towards reaching an agreement. The fact that they continued to strike even while we were there, is an expression of Israel's recklessness. This is completely unacceptable."

When Davutoğlu's trip to Gaza went over schedule, the foreign minister was only able to arrive to Islamabad towards the morning. Speaking from Pakistan, Davutoğlu explains that with Turkey's prompting, an agreement text on securing a ceasefire was prepared and approved by both Hamas and Israel the day before yesterday. However, Davutoğlu explains, Israel did not respond to the conditions for the ceasefire and its sustainability.

While Davutoğlu was in Gaza, Hakan Fidan, the Undersecretary for Turkey's National Intelligence Organization (MİT) and their accompanying committee continued to deliberate with both Israeli and Hamas sides as well as with Egypt. These meetings constituted the first time since the Mavi Marmara raid that Turkish and Israeli intelligence have converged. Sources who shared the information however, refrained from commenting on whether or not Fidan met with Israeli officials in person or indirectly.

Prior to a press conference in İslamabad, Davutoğlu paid Fidan a call to say, "As we were departing Gaza, there was text for a deal that was agreed upon, which Egypt has also confirmed. It was a text necessitating approval from senior authorities. Hamas declared their approval, however Israel did not. They didn't say 'yes' nor did they say 'no'. The fact that Israel refused to confirm throughout the night and continued to stage attacks proves once again that Israel's intentions are from good.

While in Gaza, only a preliminary ceasefire agreement was reached between Israel and Hamas. Davutoğlu however had made the following proposal to the Arab League regarding a ceasefire:

Pressure should be exerted in the international community in order to ensure the ceasefire lasts for an extended period of time.

For the ceasefire to last at least 90 days and an additional deal should be reached on lifting the embargo during this process.

Egypt should be in charge of supervising the Rafah border. Turkey and Qatar will provide full support to Egypt during this process.

Hamas should be recognized as a representative of the Palestinian public.

DAVUTOĞLU TALKS ABOUT THAT MOMENT

A striking photograph was released in the press of Foreign Minister Davutoğlu consoling a Gazan man who had just lost his daughter. "I saw the photograph being distributed by the press. I had planned to visit the Şifa Hospital with my wife and other ministers. Because my wife is a doctor, we were given a more thorough tour by the chief nurse. At that point three bodies were brought into the hospital. One was of a 15 to 16 year-old girl, the other was of someone elderly and there was also the body of a young man, who was still bleeding. We all have girls at that age, so when her father was brought in, it was an extremely emotional moment. He was told that the Turkish Foreign Minister was there to console him and so he turned and embraced us. At that moment there were so many things that drew us close. It's easy to comment from afar, but when I embraced that father I lost myself. You think about how that lifeless body could have been your own daughter. At that point I had forgotten that I was a minister in Gaza in charge of conducting rational deliberations and just felt so intensely as a human. Nothing could be as painful as losing your own child."