NATO Patriots to arrive to Turkish border on December 12th 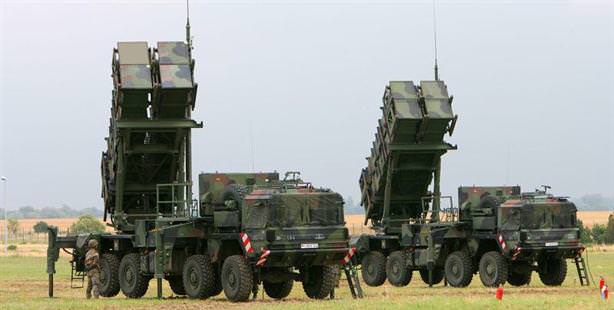 It appears the NATO Patriot missiles to be deployed along the Turkish border with Syria may be supplied from Germany.

Ankara submitted an official request to NATO on Wednesday for the deployment of Patriot missiles in order to secure the Turkish border with Syria. Turkey formally made the request after weeks of talks with NATO allies about how to shore up security on its 900-km (560-mile) border. It has repeatedly scrambled fighter jets along the frontier and responded in kind to stray Syrian shells flying into its territory.

Announcements released simultaneously by NATO and the Ministry of Foreign Affairs stated that Turkey formally raised the request for the stationing of Patriot missiles through a letter submitted to NATO Wednesday. NATO ambassadors convened shortly after receiving the official request and are planning to send a survey team to Turkey next week. The missile defense system is expected to be stationed along the Turkish border on December 12th.

NATO Secretary-General Rasmussen, "Rasmussen said the alliance would discuss the request "without delay", adding that they will be sending a team to Turkey next week to conduct a site-survey. "Such a deployment would augment Turkey's air defense capabilities to defend the population and territory of Turkey", stated Rasmussen. "It would contribute to the de-escalation of the crisis along NATO's south-eastern border."

NATO ambassadors met on Wednesday to consider the Turkish request for the deployment of Patriot missiles near its border with Syria as the conflict in its southern neighbor deepens. Ambassadors from the 28 NATO members convened a meeting at the military alliance's Brussels headquarters.

German Foreign Minister Guido Westerwelle, "My first impression of the request is that all of our criteria have been met." Germany, the Netherlands and the United States, are the only three NATO allies with appropriate Patriot surface-to-air missile systems available. German Foreign Minister Westerwelle said on Wednesday he had told his ambassador to NATO to approve Turkey's request, while the Dutch government said it would consider it. The Patriot missiles deployed to Turkey during the Gulf Wars were provided by the Netherlands. While Dutch Defense Minister Plasschaert has announced they will be sending a joint team to conduct a site-survey, the United States has also been stated to have approached the request affirmatively. The site survey team from Holland is expected to arrive in Turkey at the start of the week.

USED FOR DEFENSE PURPOSES ONLY

Ankara's official Patriot request to NATO is supposedly limited to "defensive measures". The request assures the guarantee that the missiles will not be used in an attack or to enforce a no-fly zone over Syria.

Speaking from Gaza the day before yesterday, Foreign Minister Ahmet Davutoğlu stated that the deployment of Patriot missiles would be a solely defensive preventative measure. Reminding that similar measures have been taken in the past, Davutoğlu stated, "Our basic principal objective and responsibility is ensuring the security of our nation and citizens. This is also the reason why we have NATO membership."