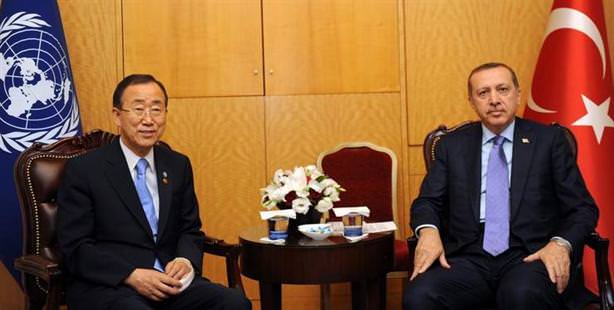 Turkey is working on a series of proposals for a new United Nations model that envisions altering the U.N. Security Council’s structure, number of permanent members and veto system.

Prime Minister Tayyip Erdoğan, who frequently criticizes the structure and functionality of the United Nations and the U.N. Security Council, has ordered a team he works closely with to prepare a U.N. model proposal from Turkey. According to information received by Prime Ministry sources, efforts are ongoing with fervor on the issue.

The ongoing efforts consist of two stages. The first stage involved a close inspection of the issues of contention due to the current structuring of the U.N. and its decision making process in addition to a thorough study of all related literature. All criticisms and proposals which have surfaced throughout the world in relation to the United Nation's structure were analyzed, thereby completing the first stage of the project.

The second stage involves developing a Turkish model for the U.N. as well as a number of constructive proposals. The Prime Ministry is presently working on what needs to be done in order to ensure better representation in the U.N. Security Council.

MODEL TO BE SHARED WITH U.N. LEADING NATIONS

Once the ongoing efforts to establish a model proposal is complete, Prime Minister Erdoğan plans to discuss the model with the U.N. Security Council's permanent members, the United States, Russia, China, France and England, thereby opening it up for debate.

If the Turkish model is completed by December 3rd, Erdoğan is also anticipated to discuss the issue with Putin during his scheduled trip to Istanbul.

Erdoğan is also expected to be in close contact with Germany and Japan, both nations that are influential throughout the world yet are not present in the Security Council.

The Turkish model for the United Nations, which was founded based on the understanding, "The world is not as it was. The dynamics of the new world need to be reflected on the United Nations' structure," includes the following suggestions:

PERMANENT MEMBERS: Decisions made by the U.N. Security Council are dictated by its five permanent member nations. This is an injustice for the world's remaining nations. Therefore, the structure of the U.N. Security Council needs to be revisited. There are a number of potential formulas in regards to this issue, including increasing the number of permanent nations, completely eradicating the permanent member nation format or reassessing their privileges.

In addition, the veto system poses difficulties in decision-making for critical issues rendering the United Nations ineffective in global developments. The veto system needs to either be eradicated completely or restructured.

NON-PERMANENT MEMBERS: The Security Council should reassess its non-permanent membership.

ECONOMIC VALUES: The U.N. Security Council does not include nations that have regional and globally-effective policies and economies. The G-20 model could be brought to the agenda for the United Nations.