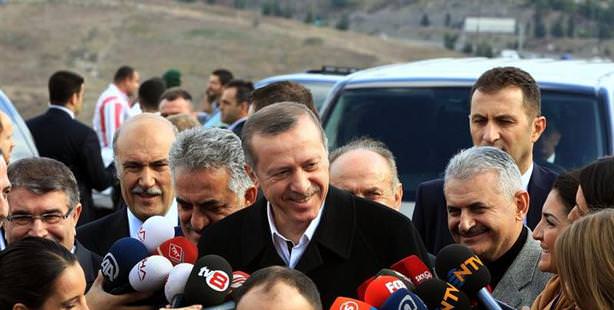 In a written response to questions posed by the Parliamentary coup Commission, Prime Minister Erdoğan stated, “We were restrained during the Feb.28, 1997 era. We were forced out of office and banned from politics.”

In the 29-page testimony, which is somewhat reminiscent of a democratic manifesto, Erdoğan stated that the orchestrators of the February 28th coup, which forced a democratically elected government to resign in 1997, had psychological problems and through the use of military interventions committed treason of Atatürk's legacy.

Erdoğan writes, "The February 28th military intervention not only targeted Turkey's Grand National Assembly, the elected government, the will of the people and civilian politics, but it also directly targeted me."

TREASON OF ATATÜRK'S LEGACY: "When issues initially began to surface in the country, the perpetrators of the coup based their halting of the assembly's functionality on the claim that the public was no longer able to exert their own will." Their actions, state Erdoğan, "was clear treason against the spirit of the Republic, and the legacy of veteran Mustafa Kemal Ataturk."

OBSTACLE AFTER OBSTACLE SIMILAR TO A MATRYOSHKA DOLL: "The 1960 military intervention resulted in handing over citizens personal rights to the establishments which resulted in the formation of a guardianship regime. Instead of having "full democracy," what began was an era of "limited and guided democracy". From the 1960 intervention, arose a situation where governments were besieged and their every step obstructed or made vulnerable to threats. Similar to a matryoshka doll, series after series of obstacles were posed for the assembly, governments in power and those engaged in civil politics."

THE ROLE OF THE MEDIA: "Unfortunately, our country's media, which is expected to be the fourth democratic power, has taken on significant roles in laying the groundwork for military interventions. Prior to the staging of coups, the media would engage in provocative, chaos-inducing and unsettling campaigns, taking on a significant responsibility in constricting civil politics by working for these guardianship establishments which embarked upon engineering politics."

A GENERATION OF VICTIMS AND DISABLED: "Due to these interventions, our general was one of victims and disabled. Myself and my comrades paid a high price during the September 12, 1980 coup and the February 28th military intervention."

I PERSONALLY EXPERIENCED FEB. 28: "As someone who was actively involved in politics in Istanbul following the September 12th era, I personally experienced how limited the political scene was. While trying to serve my position as Istanbul Municipal Mayor I was faced with numerous attempts made at obstructing me from conducting my duty."

I WAS A DIRECT TARGET: "In 1994, our great nation entrusted me with the position of Istanbul Municipal Mayor. It was after that very election that the first signals of the Feb. 28 coup began to surface. The February 28th military intervention not only targeted Turkey's Grand National Assembly, the elected government, the will of the people and civilian politics, but it also directly targeted me personally. During the Feb. 28th era, we were targeted, obstructed, mistreated, forced to resign and even sentenced to prison and political bans.

SEGMENTS OF SOCIETY WERE ALSO VICTIMIZED:

During the eras of intervention, political parties in power were not the only ones victimized as certain segments of society were also targeted, threatened and put in endangering situations.

'The days of coups are now behind us'
"Hopefully Turkey will never have to see those dark days again. Hopefully, Turkey will never again become the type of country known for hanging its own elected Prime Minister and Ministers, for executing the youth by trying them as adults or being infamously known for committing torture.

Everyone and every establishment that tries to intervene in democracy, or harbors any such intentions should keep in mind that they will sooner or later be made to face justice in the people's court. The era of coups, which Turkey has suffered greatly from is finally behind us."