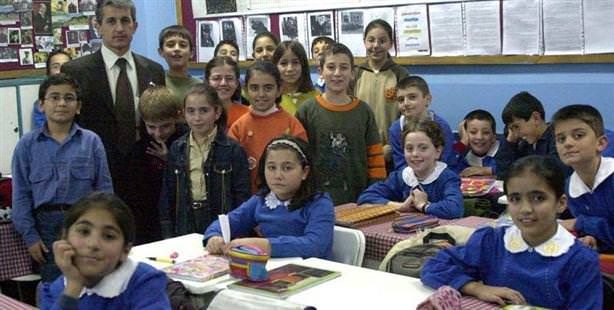 The nationwide school uniform requirement, which has been in place since the founding of the republic, is no longer. Students will now be able to select their own outfits, albeit according to certain standards; no shorts, leggings, transparent clothes and clothing with holes or short sleeves. Female students at Imam Hatip religious vocational schools will wear a headscarf to their classes, while all other schools will require a headscarf to be worn during classes on the Koran.

The National Education Ministry Uniform Regulations, which was enforced shortly after the September 12th coup in 1980, is now history. In addition to lifting the 31 year-old regulation, this will also be the first time in the history of the republic that uniforms will no longer be mandatory. The new regulation was published in the Official Gazette on Tuesday, thereby granting preschool, elementary, middle school and high school students the right to select their own clothing to attend school.

With at least 60 percent approval from parents, school administrations for private establishment preschools, elementary schools, middle schools and high schools may be able to select a school uniform. The new regulation also lifts the headscarf ban for students in Imam Hatip schools as well as for multi-program middle and high school students while attending the elective Koran course.

NO MINI SKIRTS OR LEGGINGS

Although according to the new regulation students will be able to dress in everyday attire, the ministry has imposed certain rules on school dress policy. Students will not be allowed to don symbols, badges, rosettes or emblems of any kind with the exception of that of their alma mater.

In addition, clothing worn must be healthy and weather-appropriate. Clothes that are ripped or have holes, clothing that is transparent or excessively form-fitting such as shorts or leggings as well as skirts that are either above the knee or have high slits as well as short sleeved shirts will be prohibited.

Clothing that contains any sort of political message or symbolism will also be restricted, including scarves, berets, hats and bags that bear such imagery. The new regulation also states, "In school, children's hair should be clean and not died, no makeup will be allowed, nor will mustaches or beards." Students will be subject to wear appropriate protective wear or overalls according to their school program when taking courses in a workshop, studio or laboratory.

Track suits will also no longer have to be monotype. Handicapped students will be able to wear clothing appropriate to their special needs. The purchasing of dressy attire for special days or ceremonies that take place both within and outside the classroom will no longer be required, thereby lifting the inherent financial burden on parents.

The fact that advanced nations do not require students to adhere to a uniform dress-code was underlined in the reasoning behind the new regulation.

The difficulties of accessing regularly changing uniforms, the financial burden it brings to parents and the numerous complaints received were also cited as reasons for the new regulation.

'AN APPROPRIATE STEP'
Prof. Dr. İrfan Erdoğan (Former Board of Education and Discipline Chairman): I find the regulation to be correct and pertinent. The application of monotype uniforms was a notion we derived from the West. This procedure which is inherent in militarism and religion has actually been abandoned for the most part in the West.

'There will be certain issues'
Ferahim Yeşilyurt (Psychologist): It is important to support every regulation that grants freedom in the school environment. However, there may be certain issues when it comes to applying the procedure. In situations where there was a variance in income distribution, students were at least equal in terms of what they wore to school. During adolescence especially a popular clothing item could be the reason someone is marginalized. It could also work to increase brand fixation.

Gürkan Avcı (Democrat Educators Union Chairman): I support this new regulation. The freedom of dress is important for students to feel comfortable as well as for healthy psychological development. The single-uniform process has evidently reaped disadvantageous results, such as creating a 'monolithic' cultural identity as well anti-democratic emulations.