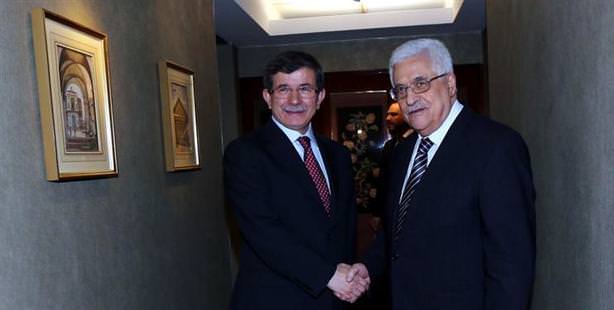 Today is a critical one for Palestine which will be seeking the title of “non-member observer state” status at a United Nations General Assembly vote today in New York. If the voting results are in favor of the Palestinian administration’s resolution, diplomatic celebrations will be held at the Turkevi, Turkey’s Permanent Representative Center in New York.

The Palestinian resolution that would change its status from an "entity" to a "non-member state" is expected to pass easily on Thursday in the 193-nation General Assembly. Although implicitly recognizing the sovereign state of Palestine, the title of "non-member observer state" falls short of U.N. membership, a status Palestinians applied for last year yet failed in its bid due to a veto from the United States. Palestinian President Mahmoud Abbas has been leading the campaign to win support for the resolution, which a significant number of European nations have expressed their solidarity with. But, Israel, the United States and a handful of other members are expected to vote against it.

Foreign Affairs Minister Ahmet Davutoğlu paid an early visit to New York to meet with Palestinian President Mahmud Abbas prior to the U.N. vote. Davutoğlu later met with his Palestinian counterpart Riyad al-Maliki. Following the meeting, the two released a press announcement in which they emphasized that if Palestine receives non-member observer state status in today's UN General Assembly vote, it will be a great victory for the Palestinian cause. The foreign ministers also announced that the celebrations for the Palestinian resolution's passing will be held at the Turkevi, Turkey's Permanent Representative Center in New York.

Referring to the Palestinian resolution as late in coming, Davutoğlu assured, "As Turkey, we will also defend Palestinian rights. I hope Palestine will be upgraded to 'non-member observer state' status, which would give them recognition as a sovereign state. We are here in New York to show our support to Palestine on this issue," stated Davutoğlu. Mentioning that during the meeting with Abbas the two discussed the potential vote for every country voting, Davutoğlu stated, "What we concluded is that hopefully tomorrow we will achieve the desired result through this very important vote." Reminding of the support Turkey has given to the Palestinian cause, Davutoğlu stated, "We hope to see the Palestinian flag wave at the UN with full state status as soon as possible. Turkey will continue its support to Palestine until that flag waves."

"There will be no changes made to the resolution"

Expressing that submitting the resolution that may lead the way to Palestine being upgrade to non-member observer state status holds much significance, Maliki stated, "My brother Davutoğlu did not leave us alone on this important and historic day and has always been with us.

When one journalist mentioned the pressure that has been exerted on Palestine to alter the resolution submitted to the U.N. and asked if there were any plans to take a step back, Maliki responded by stating "The resolution will remain how it was submitted. Yes, we have received a lot of pressure and we will continue to until this vote comes to an end."

Mentioning that from the very start, Turkey has always maintained the same position on the Palestinian issue, which is something that means a lot to them, Maliki stated, "Two weeks ago I met with my brother Davutoğlu in Ankara where we laid the entire process on the table." Emphasizing that receiving observer state status with the U.N. is not their ultimate goal, Maliki went on to state, "After tomorrow, we will continue to take steps to ensure the embargo is lifted." Stating that they are ready and prepared for today's vote Maliki reminded that this is simply the first step towards receiving full state membership status. Riyad Maliki concluded by stating, "After the General Assembly vote tomorrow, we will be celebrating at the Turkevi."

How many votes does Palestine need?

Palestine needs to receive a simple majority of votes from the 193-nation General Assembly. Prior to today's vote, Palestine had been assured of 115 votes of support from member nations. With strong support from the developing world that makes up the majority of U.N. members, the Palestinian resolution is virtually assured of securing "non-member observer state status", which means Palestine will from here on out be recognized on an international platform as a sovereign state. In other words, it will have the same status as the Vatican. In addition it would allow them access to the International Criminal Court and to join specialized UN agencies, such as the International Civil Aviation Organization, the Law of the Sea Treaty and the Nuclear Non-Proliferation Treaty. Palestine would be able to use this as bargaining power in peace process negotiations.

Appealing for support from U.N. members yesterday, Palestinian President Mahmoud Abbas stated that their next step would be to apply to the Security Council for full member status.

This is a translation of an article originally written by Eren Abdullahoğlu.