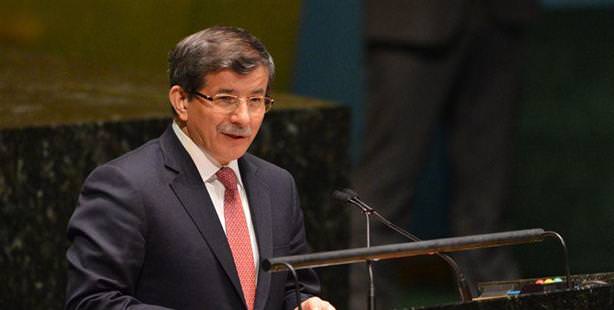 STATEMENT BY H.E. Dr. AHMET DAVUTOĞLU, MINISTER OF FOREIGN AFFAIRS OF THE REPUBLIC OF TURKEY AT THE UN GENERAL ASSEMBLY (New York, 29 November 2012)

His Excellency Mahmud Abbas, President of the State of Palestine,
President of the United Nations General Assembly,
Mr. Secretary-General,
Excellencies, Heads of Delegations,

In Turkish we have a saying:

One who closes his eyes only makes himself a night.

For 60 years the whole world has shut their eyes to the plight of the Palestinian people.

For many decades, we closed our eyes to the right of Palestinian people to their state.

And for 60 years, no resolution that this august body accepted for a Palestinian state has been honored.

However, no one can wash away the sorrow of the Palestinian people by just closing his eyes.

The reality about Palestine is simple, yet an harsh one.

It is on the streets of Gaza where thousands of people live through an inhumane blockade in an open prison.

It is in the streets of West Bank where people have to go through check points nearly on every corner.

It is in the heart of the Palestinian people who have been subjected to exiles, massacres, wars, collective punishment and blockade for many decades.

And the reality of Palestine is a bleeding wound in the conscience of all humanity.

I have personally witnessed that reality when I visited Gaza with a group of Arab ministers at the height of the recent crisis.

In Shifa hospital of Gaza, I came across a father Basil Asheva who lost his daughter Yusha a moment ago during the bombardment, which also left his wife heavily wounded.

Leaning his head on my chest to seek some relief, he had no words but only tears to tell his family's tragedy.

His tears reflected not only his personal sorrow, but also the tragedy of a whole Palestinian nation, in desperate search for relief.

Today is a milestone.

Finally, today we have a chance to open our eyes to the reality.

Today, we have an opportunity to give comfort to the Palestinian people who aspire for having a chance to uphold their dignity after years of humiliation.

Therefore, I am pleased to participate in this historical meeting at the General Assembly.

We have gathered here for correcting a historical injustice against the Palestinian people.

We all believe and cherish the vision of a just, peaceful and harmonious future.

For that future we should all together have to stand behind the Palestinian bid to become a "non-member observer state".

This is a moment of truth for all of us.

We are all aware that, the right of the Palestinians to a State has been unfortunately denied for decades.

The denial of this right to the Palestinians has no justification on any grounds, be it moral, political or legal.

Last year, the Palestinian President Mahmud Abbas made the application for Palestine for UN membership.

Unfortunately the application has been left unanswered at the Security Council.

We call on the international community, the members of this august body, to honor their already belated obligation to the Palestinians and grant them the status of a "non-member state".

It is high time for all of us to uphold the universal values of justice and dignity.

If there is one term which characterizes our region, that is dignity.

One could do without bread, but not without dignity.

The struggle of the Palestinian people in the past 65 years has also been about protecting their dignity.

They want respect and recognition of their right to determine their fate and future.

We cannot shy away from supporting a fully legitimate demand by the Palestinian people to have a state of their own.

If we are to talk about an international order and place our trust on the UN system, then the Palestinian flag should rise by this building.

That flag will not only represent an independent member state among our family of nations.

It will represent that we finally stood together to correct decades long injustice to Palestinian people and the state of Palestine.

This is our responsibility to the Palestinian people.

Let me be clear.

Our vision for justice, international order and human rights will not be achieved until the moment we actually see the flag of the State of Palestine standing side by side with ours, as a full member of the United Nations.

We have three main reasons to do so:

First and foremost, it is a humanitarian and moral obligation on our part.

No one can deny the suffering of the Palestinians since the First World War until today.

There was always an excuse for the inhuman treatment of the Palestinian people.

Today, we are talking about a whole history of this national tragedy continuing for more than 65 years.

Secondly, it is about the political and historical context.

Unfortunately, the negotiation process toward a comprehensive peace on the basis of two states, living side by side in peace, has been put on ice.

Instead, we see a deviation day by day from the internationally accepted solution that prescribes an independent Palestine established with East Jerusalem as its capital on its 1967 borders.

The current status quo is neither sustainable nor is it acceptable.

The recent Israeli attack on Gaza, which resulted in the loss of many innocent civilian lives, was a testimony to this fact.

Meanwhile the continued expansion of the illegal settlements undermines the vision of a two-state solution.

The third aspect is about our strategic vision.

Peace in the Middle East and beyond cannot be achieved without a just and comprehensive resolution to the Palestinian issue.

The deadlock in the negotiations and current stalemate in the region serves no one's interests.

Supporting the Palestinian bid is about whether we want a lasting peace in the Middle East and beyond.

Granting Palestine the status of non-member state at the UN can serve as a "booster".

It will create the long needed momentum for a negotiated, comprehensive solution, rather than becoming a substitute for it.

Our call is for peace, no more and no less.

We need to address this issue in a constructive and unbiased manner.

It requires wisdom, prudence and vision that no more deny the prospect of peace and stability in the region.

It obliges us to listen to the call for relief and justice by the Palestinian people, which we have turned deaf so far.

Here, I would also like to address certain misguided efforts to stop the Palestinians from winning statehood at the UN.

The argument that the Palestinians must resume negotiations before getting statehood is superficial.

We regret to see that there have been efforts to deter the Palestinians in their bid at the UN and efforts to dissuade the UN members.

In this episode, we often heard "now is not the right time", as was the case when President Abbas submitted the Palestinian bid for membership to the Secretary General.

For some, the timing was also "not right" when the late President Arafat read out the Palestinian Declaration of Independence on 15 November 1988.

One can trace this argument back to when the UN General Assembly decided (Res.181) on the partition on this very day in 1947.

So let me ask it bluntly: If not now, when will be the right time for the Palestinians to achieve their right to statehood?

The current stalemate in the peace process can no more be used as a pretext to undermine the Palestinian bid for becoming an internationally recognized state.

The recognition of Palestinian statehood is not an option but a moral, political, strategic and legal obligation for the international community.

And I want to speak to all Palestinians from Al Khalil to Bethlehem, from Ramallah to Khan Yunus, from Jerusalem, Al Quds Sharif to Gaza; We, as Turkey, will stand by you forever.

I call on all UN members to fulfill their long overdue responsibility towards the Palestinians.

I call on to fulfill a long overdue promise, made with the General Assembly Resolution 181 of 1947.

The draft you will be voting shortly will just be the initial step in the right direction to bring some relief to the entire Palestinian nation.

Now is the moment of truth.

It is the time to defend the basic rights of the Palestinians for statehood.

The flag of Palestine, Ladies and Gentlemen, should rise in this Assembly next to ours.

And the State of Palestine must be taken out of the shades and given its rightful place under the sun.