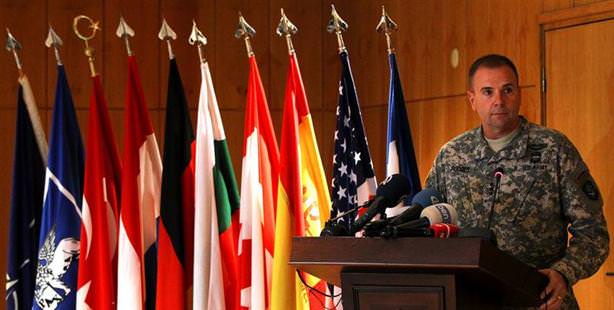 Noting that the Patriots are solely for defensive purposes, NATO Alliance Land Commander Hodges stated, “In the case that Turkey is attacked, the North Atlantic Council would convene without delay.”

Speaking to journalists during a presentation of the newly established Allied Land Command headquarters in Izmir, Lt. Gen. Frederick Ben Hodges commented on Turkey's request to implement the Patriot air and missile defense system, by stating that the option was being assessed by the North Atlantic Council, NATO's decision-making mechanism. "Patriot missiles are a defensive system. It is impossible to establish a no-fly zone or attack with them. No decision has been finalized on the issue; it is currently in the evaluation stage," stated Hodges adding that all 28 members need to vote in favor to give approval, "however," he said, "I can't see why one NATO member could vote no."

Emphasizing Turkey's importance and value for the alliance both in terms of its geographical location as well as its military capabilities, Hodges says that the NATO Allied Land Command was brought to Izmir by a joint decision made by all 28-members. Explaining that this decision only reiterates Turkey's significance for the alliance, Hodges describes Izmir as a "welcoming" and "lively city" and says he is pleased to be able to serve here.

Hodges says that since the founding of NATO they have completed two phases, one being establishing a new world order against the eastern block and the second phase which began in the 1990's. "With the second phase, our mission experienced some changes. NATO took on the mission of protecting global security from new types of threats including ethnic conflict and terrorism. However, while NATO was battling new threats, they were doing so using their old structure. For its third phase, NATO will be taking economic conditions and new threats into consideration while altering its own structure. Moving the Allied Land Command to Izmir is an indicator of this new phase," states Hodges.

In response to a journalist's question of what action would be taken if there was an immediate attack direct towards Turkey, Hodges responded by stating, "In the case that Turkey is attacked, the North Atlantic Council would convene without delay."

Following an opening ceremony on Friday in Izmir, the Allied Land Command headquarters will formally assume the responsibilities of Force Command Heidelberg, Germany, and Force Command Madrid, Spain, which are being deactivated as part of NATO's transformation. The Allied Land Command is responsible for ensuring readiness of NATO forces, conducting land operations and synchronizing land force command and control.