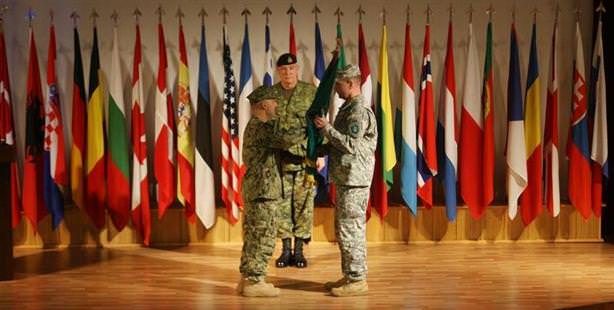 NATO's Allied Land Command will begin operations today in İzmir. Serving as the alliance’s sole Land Forces Command, all Middle Eastern operations will from here on out be coordinated from İzmir.

The Allied Land Command in İzmir, which is part of NATO's new command structure, will begin operating today. The İzmir base, which will act as the Alliance's sole Land Forces Command, will be where the coordination for troops in Afghanistan or the Middle East will be conducted from. Approximately 1,000 soldiers will be deployed to the base. However, with additional deployments from Spain and Germany the total number of military personnel on the base will reach 1,500. This means that NATO, which has dropped its personnel numbers down to 8,800 from the previous 13,000, will have deployed 18 percent of their total troops to İzmir.

In an attempt to adhere to the conditions of today and to be more economic and military effective, NATO has committed to command reforms by bringing the previous total of 11 bases down to just seven. While a number of bases are being shut down entirely, others are being combined into a single base. As a result, the allied land force command, which has been operating in Heidelberg, Germany since 1955 as well as the Retamares command, located nearby Madrid, Spain, have been combined and moved to the Allied Land Command in İzmir.

The Allied Land Command in İzmir will serve as the alliance's sole land command headquarters. According to the new structuring, NATO's air forces will be commanded in Germany and the naval forces will be hosted by England.

The Turkish General Staff issued a statement yesterday announcing that after the opening ceremony held yesterday, the NATO Allied Land Command in İzmir will be officially going into operation. The announcement stated that after lengthy deliberations, it was ultimately decided that in line with the new command structure, the allied forces would keep one of its important and effective headquarters in Turkey.

NATO's Land Force Command, located in the Şirinyer district of Buca, İzmir will be under the command of Lt.Gen. Frederick Ben Hodges, and will act as the sole headquarters from which all international troops in Afghanistan and all logistic support will be coordinated from.

'NATO and Turkey trust one another'

A handing over ceremony was held yesterday as the NATO Alliance Air Command was officially redesignated as the new Allied Land Command.

Attending the ceremony was Supreme Allied Commander Europe Adm. James Stavridis, Aegean Army Corps commander Gen. Abdullah Atay and US Ambassador to Turkey Francis Ricciardone.
Explaining that the establishment of the Allied Land Command in İzmir holds symbolic meaning, Stavridis stated, "NATO has trusted in Turkey in every step since its membership. Likewise, Turkey can always trust in NATO,"

A NATO committee is currently in Turkey to inspect possible regions for deployment of the Patriot air and missile defense system which was requested by Turkey last week to protect the border with Syria. After initial inspections of Malatya and Diyarbakır, the committee moved on to Şanlıurfa and Adana yesterday. The committee was divided into two delegations, one which paid a visit to Şanlıurfa's 20th Armored Brigade Command and the other which conducted inspection of the İncirlik base in Adana. Meanwhile, NATO Spokesperson Oana Lungescu recently stated, "The missiles will become operational in Turkey within a few weeks, and not months."

This is a translation of an article originally written by Ceyda Karaaslan and Kadir Kemaloğlu.