Patriot system for missiles not for use against planes 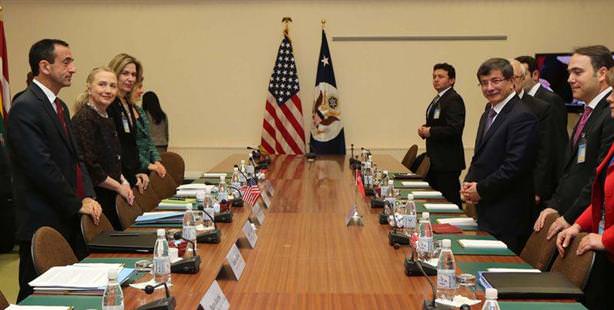 Foreign Minister Davutoğlu ensures the Patriot missiles will not be used for retaliatory strikes against Syrian warplanes and states, “Turkey already has its own conventional power to combat strikes from planes. Therefore, we have made no such request.”

Relaying information to the NATO Permanent Representative Office in Turkey following two days of meetings with foreign ministers from the alliance, Foreign Affairs Minister Ahmet Davutoğlu clarified that Turkey would in no way be using the Patriot missile defense system against potential air strikes from Syria.

Davutoğlu also explained that the precise number of Patriot missile batteries as well as the exact location of their deployment will be determined in the most optimum manner based on Turkey's military needs and the alliance's capabilities.

Reminding of NATO Secretary-General Anders Fogh Rasmussen's statement that the Patriots would only be used against incoming missile strikes, Davutoğlu went on to state the following: "Turkey already has its own conventional force to combat planes. There is no lacking in our air forces' security that would render us needing to make any request of this sort. Our risk analysis of the current situation shows that what is important is defending against missiles. Turkey already has the national capacity to handle and respond to plane attacks. Therefore, we have made no such request," stated Davutoğlu who reiterated that the Patriots will not be used against anything other than missiles."

Davutoğlu says that the speculation in the news that the alliance and Turkey have not yet reached a common ground on the number of Patriot missile batteries to be stationed along Turkey's border with Syria is not a true reflection of reality.

Commenting on Energy and Natural Resources Minister Taner Yıldız not being allowed to fly directly to Erbil by the Central Iraqi Administration, Davutoğlu stated, "More so than being an issue between the two nations, this is actually a sign of a serious lack in coordination when it comes to communication and the decision making mechanism."

'They will be arriving soon'

Lieutenant General Frederick Hodges, commander of NATO's new land command headquarters in Izmir remarked on the NATO approval to deploy the Patriot missile defense system by stating that the ruling is a clear announcement that NATO will not allow Syria to threaten Turkey's hegemony. "What it does do, of course, is send a very powerful signal," said Lieutenant Hodges.

As for how long it will take for the Patriot system batteries to be positioned in Turkey, Hodges stated that the deployment of the systems in Turkey will be sooner than expected. "These are large systems. They will be brought to Turkey via ships and they will be uploaded to these ships in a few weeks. I cannot give you a specific date for the deployment of Patriots but it will be shorter than what most people expect," he said.