United States also on board to send Patriots 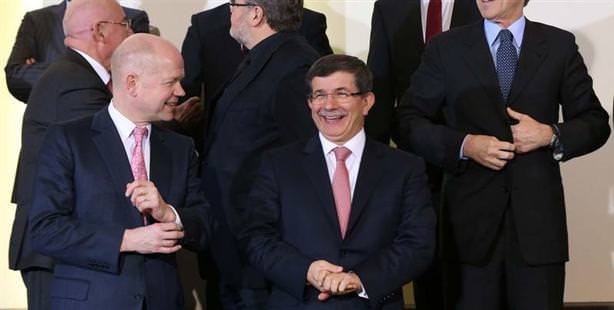 According to Davutoğlu, the United States will be joining Holland and Germany in sending Patriots to be stationed along Turkey’s border with Syria, “They are working on it now,” states the foreign minister.

Davutoğlu, who also explained that while in Brussels for the NATO Council Meeting, U.S. Secretary of State Hillary Clinton said, "The decision to send Patriots to Turkey was one of necessity for the solidarity amongst NATO members," went on to answer a series of questions posed by SABAH, as follows:

*The Patriot will be brought in from Germany and Holland, but will the U.S. also be contributing?

"In addition to Germany and Holland, Patriots will also be coming from the United States. They are working on this at present."

* You drew attention to the insufficiency of Turkey's air defense system. Is this something you discussed with Russia?

"The countries that could be a part of this project are already established. What is important is that Turkey advances its own capacity as soon as possible. A county that has assertion in the region and is located in the vicinity of the risk region should develop its own national missile defense system."

THE SITUATION IN IRAQ

* Do the Americans realize the severity of the situation in Iraq?

"They know it is extremely serious."

* Are the developments in Iraq leading to a Kurdish-Arab conflict?

"The issue is not a Kurdish-Arab conflict. There have been Sunni Shiite conflicts in the past. What Iraq needs is an administration which embraces all sides, which contributes, is an integral part of the nation's politics and is willing to distribute the power. However, at present there is an administrative understanding which involves monopolizing power and excluding the various sides, which inevitably leads to conflict."

* There is increasing tension between Maliki and Turkey…

"The conflict is not one that directly involves Turkey. There is an internal conflict which puts Turkey on one side. In other words, as clashes increase amongst their own coalition partners, they begin to see Turkey as taking a side. They feel that by drawing attention outwards, they will be consolidating internally. However, this attitude is incorrect. In Iraq there is an administrative understanding that prevails which is based on conflict with all sides. When that is the case, it is assumed that Turkey is behind the side they are clashing with, whereas Turkey actually stands behind all sides in Iraq. Turkey has never supported the Arabs being against the Kurds or the Sunnis against the Shiites or vice versa. Turkey has always placed importance on Iraq's unity and has developed relations with all sides. As strong relations developed with all sides (Maliki) makes it seem as if relations were especially developed well with him. That is not correct."

* Did you discuss the issue of Palestine and Israel with Clinton?

"We did. Clinton said, 'We need to strengthen Mahmoud Abbas in Palestine and make contributions once again to the peace process.' She mentioned establishing a permanent ceasefire in Gaza. She also said Turkey's support was important. I responded by saying, 'We also believe in the need to empower Abbas. The latest ruling at the U.N. General Assembly was the most important step to reinforce Abbas and he came out strong. We would have expected you to have at least abstained from the vote', I told her."

* Will the U.S. be making any new moves following the elections in Israel?

"It's possible. I have said to Clinton before 'In 2008, there was a U.S. and Israeli election. Prior to these elections, Israel staged an attack on Gaza. The same thing is transpiring in 2012. This is actually a move intended against Obama and to squeeze the U.S. in.' If they do not take on a stance in regards to new settlements in Jerusalem, then it will be impossible to establish peace. When it comes to Jerusalem, the issue no longer solely pertains to Israel and Palestine; it then becomes an issue that involves all Muslims and Christians. These most recent settlements are drawing international reaction. The United States needs to be warning Israel on this."

* You met with the French Foreign Affairs Minister. When will President Hollande be visiting Turkey?

"I paid a visit to Paris in the month of July. During this trip, I brought up the issue of the opening of chapters put on hold by Sarkozy. French Foreign Affairs Minister Fabius stated, 'we are going to help'. I said, 'to open certain chapters blocked by France during Ireland's term presidency would allow us to gain a new momentum in the EU process.' He responded by stating, 'I am aware of the promise that I made and we will assist in this matter.' Hollande's trip is scheduled for within the first few months of 2013."

* Should we expect an acceleration of Turkish-Armenian relations closer to 2015?

We discussed the Nagorno-Karabakh issue with Russian Foreign Minister Lavrov in Istanbul. There will be elections held in spring of next year in Armenian and in Azerbaijan in fall. There are certain difficulties involved with making any progress prior to these elections. The psychological environment for one thing, isn't ready. As for the Nagorno-Karabakh issue, we would love negotiations between Azerbaijan and Armenia to reap results. This will smooth the path for Turkey."