A photograph of brotherhood 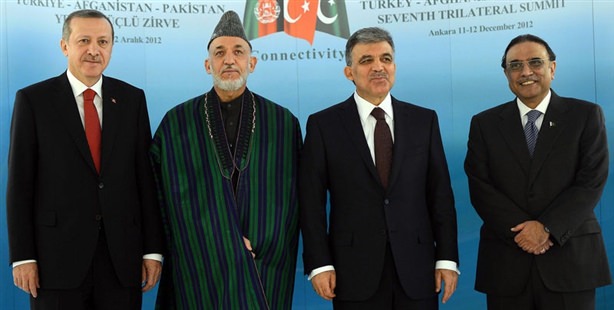 While suffering great divides in the struggle against terrorism, the leaders of Afghanistan and Pakistan convened in Ankara, as the Turkish capital and its leaders took on the task of acting as mediator for the two “brother nations.”

Afghanistan President Hamid Karzai and his Pakistan counterpart Asif Ali Zardari were hosted in Ankara by President Abdullah Gül yesterday. In Turkey to attend the Seventh Turkey-Afghanistan-Pakistan Trilateral Summit hosted at the Çankaya Palace, both President Gul and Prime Minister Tayyip Erdoğan had the opportunity to hold separate meetings each with Karzai and Zardari, followed by bilateral meetings with the two visiting leaders, which was followed by a quartet meeting of them all.

The main objective of the summit is to establish advanced-level cooperation between Turkey, Afghanistan and Pakistan in economic, transportation, education, communication and security.
The summit, whose main theme was "Connectivity" between the three nations, focused on ways to increase collaboration on transportation, such as including Afghanistan in the Turkey-Pakistan railway project. In addition, the three nations decided to continue increasing collective military training programs and drills. A Memorandum of Understanding to increase trilateral trade was signed between the three countries followed by a joint press conference.

Speaking to the press, President Gul stated, "This meeting, which is taking place in an environments where a recent assassination attempt was made on Afghanistan's National Intelligence Agency Chief, is of extreme importance. My valued friends have exhibited the determination to continue holding these trilateral summits. There may be some who would like to obstruct this, however the dialogue will continue."

THE DIALOGUE PROCESS MUST CONTINUE

Karzai expressed that the opportunities for dialogue presented to Afghanistan and Pakistan by Turkey was extremely beneficial, especially for the fight against terrorism.

In a joint statement released following the summit, it was stated that the presidents are "aware of the crucial importance of connectivity among the three brotherly countries, at the level of their people, institutions, infrastructures and economies, noting the need for further developing the transport connectivity among the three countries as a basis for increased economic cooperation, reiterating the crucial importance of regional cooperation for addressing regional challenges."

Meanwhile, the floral logo display was done by none other than President Gül's wife Hayrünnisa Gül, who used freshly-cut flowers in the design.