By 2071, we will have acquired the power of the Ottomans 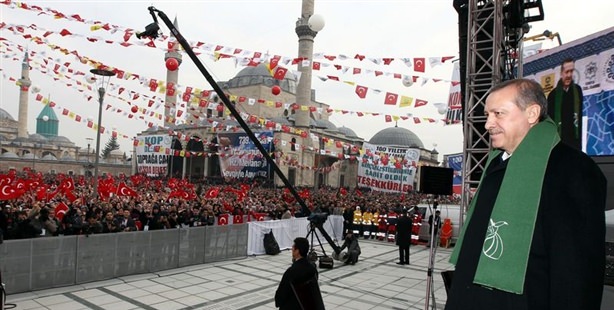 Announcing that by the year 2023, Turkey will become one of the world’s top ten economies, Erdoğan stated, "By 2071, Turkey will have reclaimed the level it was once at during the Seljuk and Ottoman eras.”

Speaking at a mass inauguration ceremony in the central Anatolian province of Konya, Prime Minister Recep Tayyip Erdoğan delivered a series of striking messages. Having first mentioned the year 2071 during the September 30th AK Party Congress, it was here in Konya where the prime minister expressed their clear objectives for the nation in 2071.

Stating that according to their 2023 target, Turkey will have become one of the world's top ten economies, Erdoğan said, "By 2071, Turkey will have reclaimed the level it was once at during the Seljuk and Ottoman eras." The Prime Minister was referring to the 1000th anniversary of the Battle of Manzikert, fought between the Byzantine Empire and Seljuk Turks, the battle was considered as having "opened the gates of Anatolia to the Turks."

Erdoğan's messages from his Konya delivery were as follows:

"We will become even stronger. By 2023, we will have become one of the world's top ten economies. Hopefully, by the 1,000th history of the Turks' very first march in Anatolia to today and to 2071, God willing Turkey will once again reach the level it has been in the past under the Ottomans and the Seljuks. While developed nations are being heavily affected by the global financial crisis, we as Turkey continue to march steadily on our path.

We may not be able to see the year 2071; however I am especially appealing to the youth, to those who are single. You will get married. God willing, you will be the ones to raise the generation of 2071. However, you will do so with such a consciousness that they will become the ones to carry this nation's place in the world to way beyond the top ten. We are people of a different scope. This is why I say we should have three children each wherever I go. Look, the number should be even higher, but not lower.

Let's not neglect this. If a new era in the education system referred to by the code number 444 has begun, if mandatory education has begun, then you need to take this into deep consideration. Do not pay heed to what some people are saying on television, they do not have these sorts of issues to contend with. They are not concerned, we are the ones concerned. Therefore, we are going to work hard and we are going to run around a lot doing so.

When our children are born throughout this country, they will not come in this world as a vehicle for terrorism; instead they will be born as vehicles for this nation's development. We are targeting people. Our priorities are not the state; we have always said our priorities are the people. After that, everything is for Turkey."

SCHOLARSHIPS AND GRANTS TO INCREASE

Democracy was harmed during eras when the economy was not doing well. When the April 27 e-memorandum was released, it cost Turkey the heavy annual price of two billion dollars due to interest hikes. Konya knows well the price that was paid on February 28th. At that time, they wanted to strike a heavy blow to the Konya industry which, in the center of Anatolia was standing on its own two feet. However, like many other cities, Konya stood up to the military interventions, was patient and even continued to contribute to Turkey's growth and elevating democratic standards. We will continue to uphold our patience in the same manner.

Let us never fall prey to those attempting to set us at odds against one another. Let us not spend our energy on this. Let's exert our energy externally. Never pay heed to those with intentions to separate or divide us, because, we have a lot more to do for this country. There are those who envy us and I say, let's not play their game. I believe we will be able to put an end to this game. However, in unity and solidarity, up until now you have always given the best response in the polls to those who envy our positive progression, our course in unity and solidarity. I believe that you will continue to do so from here on out."

While delivering an address to Konya residents, Prime Minister Erdoğan wore a scarf which was made and distributed by the Konya Metropolitan Municipality and was green with white imagery of a whirling dervish.

A number of Syrian refugees also came out to hear Erdoğan's address. After speaking for the mass inauguration, Erdoğan went to the Mevlana Museum and also visited the home of local resident Esma Çökmen. In the evening, Prime Minister Erdoğan attended a dinner held by provincial chairman.