‘Dissension will not grow on this land’ 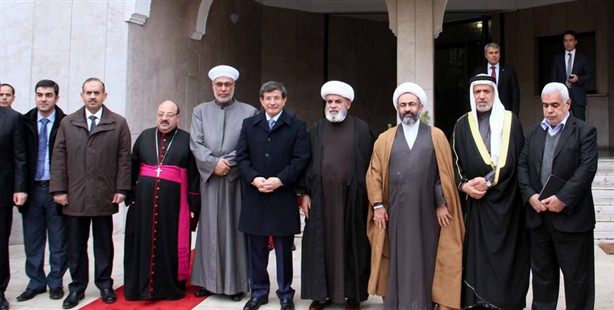 While in Konya to attend Şeb-i Arus or Night of Union celebrations in commemoration of the 739th anniversary of Mevlana aka Jalal ad-Din Muhammad Rumi, Foreign Minister Davutoğlu had the opportunity to meet with members of Kirkuk’s State Assembly, representatives of spiritual leaders from Basra as well as with Ata Muhammed Nur, Governor of the city of Belh, Afghanistan for breakfast.

Foreign Affairs Minister Ahmet Davutoğlu delivered an address pointing out that Kirkuk, where Arabs, Kurds, Turkmen, Christian, Sunni and Shiites all co-exist, is a symbol of brotherhood. "There may be some who want to incite sectarian - division based contentions. However, all religious leaders and especially the Grand Ayatollah Ali al-Sistani, all Sunni and Shiite foundation directors and all Christian religious leaders have exerted extensive efforts to overcome this. Hopefully, with their efforts, this dissession will never exist on this land, will never plant a seed."

Muhammet Maliki, the Basra representative for the Grand Ayatollah Ali al-Sistani stated, "We hope that Turkey will continue to uphold its balanced stance in issues pertaining to the Islamic world. Up until now, Turkey has always displayed stances befitting to its strength and gravity."

Kirkuk State Assembly Chairman Hasan Turan noted that the Kirkuk committee has representatives from every group in the city, and said, "There may be some with ill intentions regarding brotherhood in Kirkuk, Iraq and the region. Rearing their ugly faces yesterday, led to blasts in a number of areas in Kirkuk. However, through the brotherhood we have shared here, we will put an end to that game."