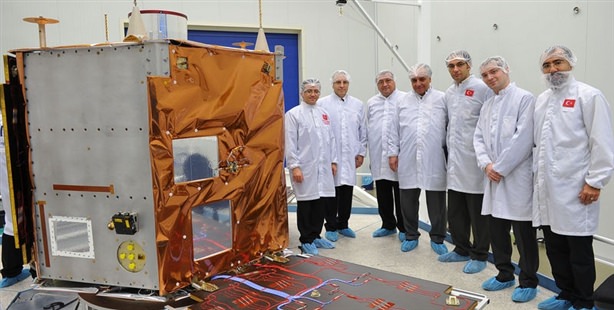 The signals to be received from the satellite that will be launched later today, at 6:12 pm to be exact from a base in China, will be used by both the Turkish Armed Forces as well as civilian institutions in order to assist in a wide array of areas such as providing agricultural analysis and to calculate erosion risk.

Turkey's first-ever domestically-produced high resolution observation satellite Göktürk-2 will be launched today at 18:12:52 from the Jinquan Launch Base in China. The launch was originally scheduled for December 19th, however due to negative weather conditions; the launching ceremony was brought forward. Teams from the Scientific and Technological Research Council of Turkey's (TÜBİTAK) Space Technologies Research Institute (UZAY) stationed in Ankara and Norway will also be connected live to the launch.

TÜBİTAK's Space Technologies Research Institute (UZAY) will also be holding a launching ceremony at their METU compound to witness onscreen the live broadcast of the satellite's take-off which will also be attended by Prime Minister Recep Tayyip Erdoğan. TÜBİTAK Uzay and TUSAŞ Aerospace Industries were responsible for creating the primarily domestic made Göktürk-2,

The satellite, which will fulfill a number of needs in Turkey's fields of defense and development, will be stationed 686 kilometers above the earth. The first signal following the launch will be received by Ankara at 9:25 pm. Once that first signal is received, information on operating components such as the satellite temperature, power, voltage, etc. will also be relayed. After which the national aviation computer, Bilge will use the commands to stop the looping motion of the satellite which occurs once it departs the rocket. The satellite will be controlled via three axes and will allow for the observation of any point in the world desired. Later, the solar panels will be opened one after the other in order to produce the electricity necessitated by the satellite. The first imageries from the satellite are expected to be received between December 25th and 30th.

Responding to questions on Turkey's first national land observation satellite, TUSAŞ Uzay Systems Director İbrahim Keskiner explained that the imagery obtained from the Göktürk 2 will be used for militaristic intelligence as well as for civilian purposes such as in agricultural product analysis, harvest estimations, pollution and damage assessment from natural disasters. Keskiner also noted that the imagery will be extremely helpful in determining areas with risk of erosion, for urban development and mapping and identifying illegal structures.

Keskiner says that the intelligence-based imagery acquired by Göktürk 2 will not be transmitted freely but will instead use a nationally-developed crypto system to be deciphered and then sent. Explaining that the cylindrical structure on the satellite contains a camera that allows for up to 2.5 meters' resolution, Keskiner states, "The level of resolution allows the possibility of detecting a 2.5 meter-sized object on earth. In other words, with the imagery obtained from this satellite, a vehicle on the highway will be comfortably visible."

IMAGERY WILL BE ABLE TO DETECT A CAR ON A ROAD

Keskiner says that they are insured for any unforeseeable problem during the satellite's launch and assures, "If an undesired event occurs, we will be sending another satellite that was built the same way and used in tests,"