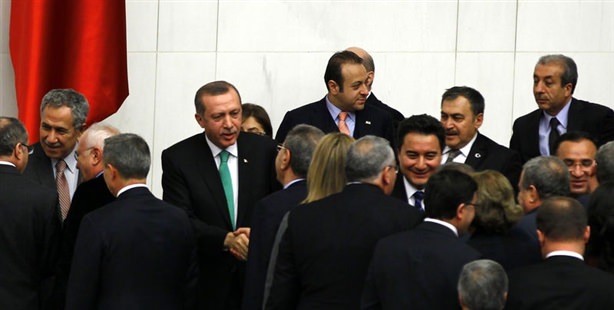 After a ten-day marathon of deliberations, the 2013 budget planning has been approved by Turkey’s parliament. During an address offering his gratitude, Erdoğan stated that this nation will continue to grow with security and stability.

The General Assembly met yesterday for their final deliberations on the last day of the ten-day budget planning session chaired by Speaker of the Parliament Cemil Çiçek. Once the 2013 budget was passed during yesterday's session, Prime Minister Tayyip Erdoğan delivered a concise address to express his gratitude. Noting that with the passing of the budget, a new era has begun, Erdoğan stated, "During the opening speech for the budget session, the Istanbul Stock Exchange reached 76,954 points, marking the highest record in its history. I also want to deliver the good news that during the budget closing deliberations, the Central Bank's exchange reserves, including gold, reached 120 billion, 586 million dollars, breaking yet another historical record. We are expecting the year 2012 to close with a number of other records. In 2013, we will continue to allow our nation to grow with stability, security, brotherhood and solidarity"

DO NOT EXPLOIT ULUDERE

During the final day of budget planning deliberations, Deputy Prime Minister Ali Babacan responded to questions and criticism from the opposition. Addressing BDP's criticisms of Uludere and CHP's call for "the government to apologize", Babacan stated that he finds attempts to make the Uludere incident a means of conflict to be extremely dangerous. "Uludere was a painful experience, a conscientious responsibility. To perceive Uludere as an opportunity, as a means of exploitation is not committing level-headed politics. In Gediktepe, civilians turned out to be terrorists. We paid the price and lost martyrs. If this exploitative policy comes to an end the issue will be easier to solve," stated Babacan.

Following the budget's approval the proposal was made to postpone the Assembly Advisory Board until January 2nd, 2013 and a vote ruled in favor.

This is a translation of an article originally written by Zübeyde Yalçın, Evrin Güvendik, Hazal Ateş, Yahya Bostan and Ali Ekeyılmaz.