Ankara pleased with Kerry as U.S. Secretary of State 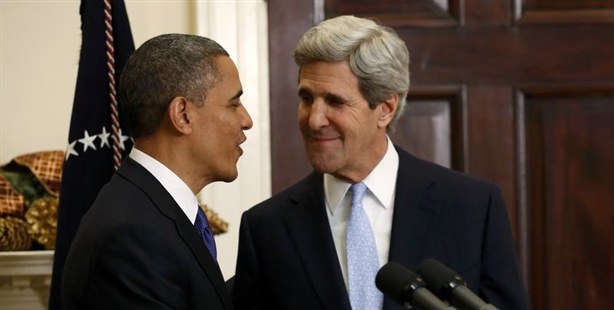 Ankara is pleased with President’ Obama’s nomination for John Kerry to be appointed U.S. Secretary of State over Susan Rice, whose position on Israeli and Palestinian issues was of an issue of contention for Turkey.

In a congratulatory letter to Kerry, Foreign Minister Ahmet Davutoğlu writes, "Let's meet as soon as possible." Davutoğlu is also pleased that Kerry has been nominated by President Obama over U.S. Ambassador to the U.N. Susan Rice. Rice's role in the U.N. vote on the Palestinian resolution and her stance on the crisis between Turkey and Israel has always been met with contention by Ankara. Kerry's political experience and past of siding with practical solutions is expected to reflect positively on the crises in the region.

According to sources, Foreign Davutoğlu requests they meet as soon as possible in the friendly and sincere letter sent to Kerry. Davutoğlu writes that the two nations have a number of important joint issues to discuss, also mentioning Syria. Davutoğlu met with John Kerry who was also Chairman of the Senate Foreign Relations Committee, during a series of meetings held in Washington.

After Obama's cabinet is approved in January, Prime Minister Tayyip Erdoğan is expected to pay a visit to Washington. Erdoğan will deliver the message to both Obama and Kerry that it is time they assume responsibility on the Syria issue. Turkey is concerned that the Obama administration may continue to refrain from taking risks in this second term for the Democratic Party. In this regard, Kerry's nomination is a relief for Ankara. Commenting on Kerry's nomination, a high-level official states, "He doesn't have to prove himself. He is experienced, confident and someone who has been closely following recent developments."