“To show how brotherhood can fight for freedom” 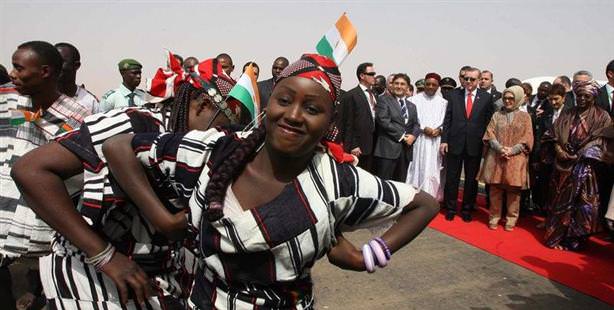 Speaking from Niger, Prime Minister Erdoğan stated, “Our concern is not for this country’s petroleum, gold or diamonds. We are here in order to exhibit brotherhood and friendship.”

Prime Minister Recep Tayyip Erdoğan was addressing the Turkish-Nigerian Businessmen's Forum while in Niger for the second leg of his Africa trip, when he stated "Our concern is not for this country's petroleum, gold or diamonds. We are here in order to exhibit brotherhood and friendship."

During his address, Erdoğan went on to deliver the following messages:
"We want to establish long lasting collaboration with Africa based on mutual benefit and respect and not coming from a one-sided colonialist mentality. This is why we are here today in Nigeria. Our concern is not for the petroleum, gold or diamonds found here, instead we are here in Nigeria in order to show how our decades and centuries of friendship and brotherhood can stand up together to fight for freedom against the exploitative understanding established here.

Five agreements were signed between Turkey and Niger during Erdoğan's stay on "economic, commercial and technical collaboration", "water supply and sanitation", "collaboration on water", "collaboration on forestry" and the "mutual lifting of visa regulations for diplomatic passports.
"You are a symbol of the modernization of the Muslim world"

Following his trip to Gabon, Prime Minister Erdoğan arrived to Niger, where he was greeted by Nigerian President Muhammed İsofou and other leading tribal members and was welcomed with a colorful performance by the Fulani tribe. Erdoğan was also greeted with an official ceremony at the Nigerian Presidential Palace where he held a bipartite meeting with İsofou. In the evening the Prime Minister attended a dinner hosted by İsofou in his honor.

While presenting Prime Minister Erdoğan with a state medal, President İsofou stated, "You are a symbol of the modernization of the Muslim world." Upon receiving the honor, Erdoğan stated, "I believe that Turkish and Nigerian relations will shine, just like this medal."