Prime Minister Erdoğan visits the House of Slaves in Africa 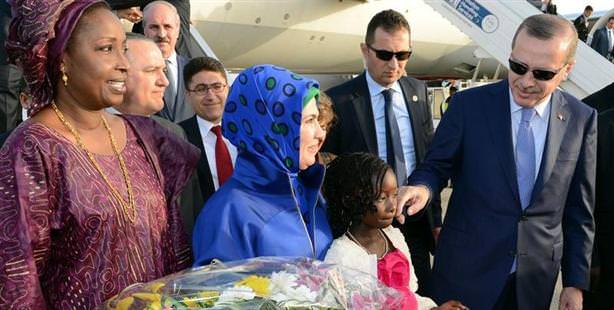 During Prime Minister Tayyip Erdoğan’s stay in Senegal, the third stop on a three-country tour of Africa, he had the opportunity to visit Goree Island, infamously known for its history as being a slave trade destination.

Accompanied by his wife Emine Erdoğan and his daughter Sümeyye Erdoğan, Prime Minister Erdoğan visited the island's House of Slaves Museum, where they toured the series of small rooms where slaves were held divided by age and gender and listened to all of the stories of what took place there.

Erdoğan also inspected the shackles used on slaves in the past that were on display; however he was most affected by the "Door of No Return." This door in the House of Slaves, opens up to the final exit point for victims of the Atlantic slave trade, the ocean from where slaves were either placed on ships on drowned in the ocean.

An interesting dialogue surfaced during the prime minister's tour of the museum. Erdoğan was examining a statue of a slave being sent to the guillotine when he said, "they should send this statue to France."
During his visit, Erdoğan was awarded a "Roaming Ambassador Certificate" and a medal in the shape of the Phoenix bird, the island's symbol.