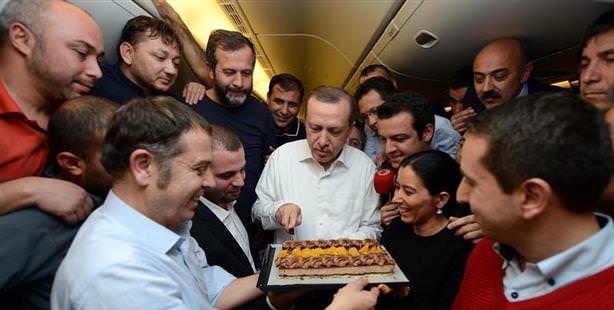 Commenting on recent findings in connection to the murder of three Kurdish women in Paris, Erdoğan stated, “They wouldn’t have opened the door to someone they didn’t know,” pointing to the strengthening possibility the deaths were the result of an intra-PKK conflict.

Prime Minister Tayyip Erdoğan responded to reporters' questions on his return yesterday from Senegal, the third and final stop on a three-country tour of Africa.

On Erdoğan's comments on France from Senegal…

(Will European nations with colonialist pasts feel discomfort by your talks in Africa?)

"It doesn't matter to me. How many years did Sarkozy make us suffer? We were always patient. When Sarkozy comes to Senegal he states, "Let's return to the past" and all of Senegal rises to their feet. How could such a huge insult as this be made? No matter how many Senegalese, Tunisians or Algerians reside in France now, you were the ones who committed genocide against them in the past. You are the ones who committed genocide in Ruanda."

When reminded of his remarks that a statue in the House of Slaves in Goree Island be returned to France, Erdoğan stated, "They are literally ridiculing the situation. On the one hand there is a statue and on the other hand it represents a slave headed for the guillotine."

Referring to the cells Erdoğan visited in the House of Slaves museum and memorial to the infamous Atlantic slave trade, the prime minister stated, "Let us not forget that at that time 12 people were held together in a seven meter, 60 centimeter square room."

(Referring to İmralı) "We have one person staying in a 12 meter squared room. He has a bed; he has or will soon have a television. He also gets to pace in the courtyard with five other comrades an hour each day. Meanwhile, you are all aware of the hell being raised due to these conditions. This is the difference between us and the west. And they (the Africans) were innocent people. They hadn't killed anyone. They were people who were stolen and not just of their physical bodies, their spirits were robbed as well. It still continues. However, now it is different, it is being modernized."

"First of all, the conditions in İmralı are extremely good and much better than in any country in the world. We are literally talking about special care here. This individual charged with aggravated life imprisonment is able to see his close ones. Dependent on special authorization from the Ministry of Justice, certain people are granted permission to see the convict." When asked if any changes to his conditions should be expected, Erdoğan replied by stating, "The steps we have taken there are clear. Do not expect anything else."

On the Paris murders…

Erdoğan also commented on the deaths of three female PKK members, co-founder Sakine Cansız, Fidan Doğan and Leyla Söylemez, whose bodies were found gunned to death early Thursday morning in the Kurdistan Information Center of Rue Lafayette in Paris. Drawing on the growing possibility that the assassinations were a result of an internal PKK dispute, Erdoğan stated, "They are actually facing serious contention. There are different factions within the separatist terrorist organization. In a recent interview with Fırat News one of these factions stated that first of all they are definitely against the peace process and secondly they will do whatever necessary to cause them to break down.

If you notice in a previous announcement I stated that such incidents have happened before and that the killings could be a sign of this. Unfortunately in the past, our well-intentioned steps were always derailed by those with ill intentions.

This could have been the result of an internal dispute or it could have been an attack staged to halt our well-intentioned strides on resolving the Kurdish issue. Therefore, we need to wait for the answers," stated Erdoğan noting that the French government will be conducting the investigation.

Prime Minister Erdoğan went on to explain that certain technical details have emerged that could shed light on who was responsible for the killings. "We have received information on certain technical details which are quite interesting. This office was actually locked from the inside and not with just a single lock. The locks used necessitated codes in order to enter. They were not doors that someone who didn't know the code could have opened. Therefore, it is apparent the three women opened the door. It is most likely that they would not have done so for someone they didn't know. Therefore, they most probably opened the door to someone they were familiar with."

When asked by reporters if it is likely the murders were committed by someone from within the PKK, the prime minister replied by stating that it is becoming a stronger possibility.

A possible cabinet revision has long been expected by Prime Minister Erdoğan, who had maintained his silence on the subject until he responded to questions from the press yesterday; leading the door open to speculation changes may be made to the cabinet soon.

When reporters said, "There is speculation there may be changes made to the cabinet upon your return from Africa," Erdoğan responded by stating, "Give me there names, you can help me. My goodness… Anything can happen at anytime my friends."

Erdoğan presented the fellow journalists accompanying him on his returning flight from Senegal with a cake in honor of January 10th 'Working Journalists Day.'

This is a translation of an article originally written by Yahya Bostan and Mesut Er.