Female deputies carry the bodies of the Paris victims 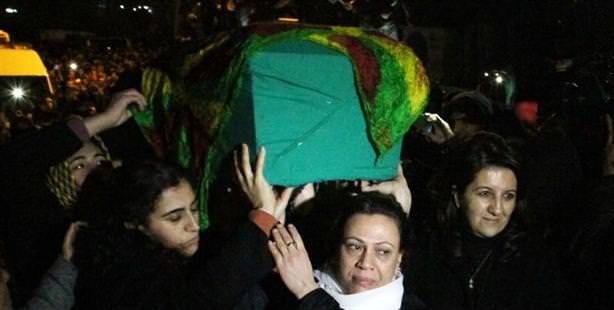 Turkey welcomed the arrival of the bodies of the three Kurdish women, Sakine Cansız, Fidan Doğan and Leyla Söylemez, who were murdered in Paris last week. On Thursday, a funeral ceremony will be held for the three PKK members in Diyarbakır, who will then be laid to rest in their respective motherlands.

A wide crowd gathered in Diyarbakır yesterday awaiting the landing of the three assassinated PKK members. Amid tight security, thousands of Kurds gathered peacefully outside the airport, holding up pictures of Cansiz and chanting slogans in support of the PKK.

The bodies of PKK members Sakine Cansız, Fidan Doğan and Leyla Söylemez arrived to Istanbul's Atatürk Airport at around 4:30 pm yesterday afternoon and were then transported to Diyarbakır. Full security measures were also in place at the Atatürk Airport and riot squad police were kept ready and waiting to intervene in an escalation of events. A barricade was set up at the entrance to the domestic flights terminal. Nonetheless, a group still arrived to the airport in order to protest the murders in Paris.

'MOTHERS SHOULD NO LONGER CRY'

Speaking in Paris Zeynep Cansız, mother to Sakine Cansız stated, "We want peace to come and mothers to no longer cry and we don't want anything else."

The bodies were transported to Diyarbakır on a Turkish Airlines passenger flight. In a crowded convoy, the bodies were brought to the morgue of the Private Bağlar Hospital. A significant number of women, including BDP (Peace and Democracy Party) Deputy Chairman Gültan Kışanak and Deputies Leyla Zana, Sabahat Tuncel and Ayla Akat, helped carry the women's coffins on their shoulders. BDP has assigned 1,000 individuals to attend to today's funeral ceremony.

Following a call by DTK (Democratic Society Congress) for "Life to halt," during the funeral proceedings, the governorship decided to hold a security meeting prior to today's funeral ceremony. A number of stores in Nusaybin and Başkale will remain closed today. The Diyarbakır Chamber of Trade and Industry, Chamber of Merchants and Tradesman and the Association of Industrialists and Businessmen have all made appeals to citizens for sensitivity in light of today's ceremony.

This is a translation of an article originally written by Mesut Er and Faysal Karadeniz.