Turkey’s transformation needs to be acknowledged 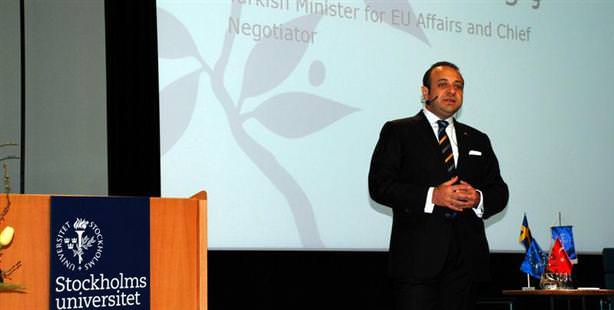 EU Minister Bağış recalls a promise he made to the former Swedish Foreign Minister Anna Lindh that Diyarbakır would undergo a transformation; however laments the fact that Lindh, who was assassinated in 2003, will never get the chance to see how that promise was fulfilled.

"Immediately following the 2002 elections, Sweden's Ambassador to Ankara Ann Dismor paid a visit to Recep Tayyip Erdoğan, who had yet to be elected deputy," explains Bağış.

"Dismor, the author of the book "Turkey Decoded" asked Erdoğan at the time, 'My foreign minister wants to visit Diyarbakır, however has not been authorized to do so. Your party has become the leading party. Will the government you form grant permission for a trip to Diyarbakır?'

Erdoğan responded by stating, 'Your foreign minister can of course visit, however under one condition; and that is that a second trip be made to Diyarbakır two years from now which will allow them to be able to see the changes that will be brought on by the AK Party," recalls Bağış.

Upon receiving this response, Sweden's Foreign Minister at the time Anna Lindh became the first FM to visit Turkey under the AK Party government and also paid a trip to Diyarbakır.

Unfortunately in 2003, Lindh was the victim of an assassination in Stockholm and was therefore unable to fulfill her promise of visiting in two years' time.

"Anna Lindh may have not been able to fulfill her promise, however we have kept ours. We have realized a transformation in Diyarbakır and granted our Kurdish citizens more rights than they have ever had up until now," said Bağış. According to Bağış, the support offered by Sweden for Turkey's EU path is a result of the transformation that Diyarbakır has undergone.

Bağış also commented on the death of three Kurdish women in Paris late last week, expressing his view that the murders were an attempt to ax the critical negotiation process ongoing in Turkey at present. Bağış also stated that France needs to find those responsible as soon as possible and bring them to justice, and said, "If they continue to delay in finding the perpetrators, then suspicions regarding France will only increase."

Bağış also referred to the French President Hollande's comment that he knew one of the women killed was a "slip."

Minister Bağış explained that even the PKK leader Abdullah Öcalan realizes now, 30 years later, that this issue will not be solved with weapons. "Just yesterday we were debating the lifting of parliamentary immunities, whereas today, we are undergoing an extremely hopeful process. Turkey could revert back to those days at any moment," stated Bağış who called on everyone to stake a claim for this very sensitive negotiation process.

IF OBSTACLES ARE LIFTED, CHAPTERS WILL BE OPENED

Bağış also said that if the political obstacles faced by Turkey during this period of EU deliberations are lifted then from a technical standpoint, it is conceivably possible that Turkey could open ten chapters to negotiations in 12 months and 15 chapters in 18 months.

This is a translation of an article originally written by Alparslan Akkuş.