Syrian refugees get first taste of democracy in Turkey 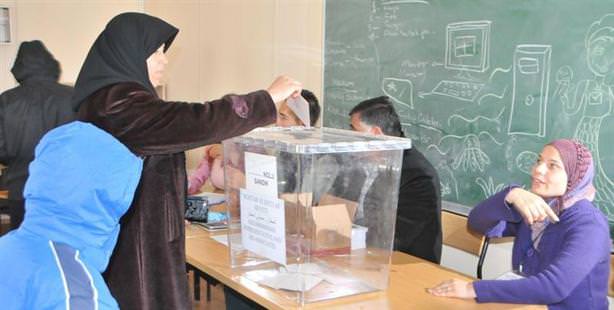 Thousands of Syrian refugees residing in a ‘container city’ in Kilis went to the polls on Thursday in order to elect camp authorities and members of an administrative council.

Fourteen-thousand Syrian refugees forced to abandon their homes and seek shelter in Turkey due to the internal strife in Syria and currently residing in the Öncüpınar Camp, which consists of a 'city' of 'container' homes, voted on camp officials and members of an administrative council in what Ankara says in an exercise in democracy for the Syrian nationals.

Voting began at nine a.m. yesterday and commenced at four in the afterneen as Syrian refugees voted to elect six neighborhood authorities or mukhtars out of 20 candidates, three of which were women. The six mukhtars will serve as the heads of local administrative units and will also be included in an 18-member administrative council. Any Syrian refugee at the Öncüpınar Camp over the age of 18 that had registered was eligible to vote in yesterday's election.

Commenting yesterday on the vote, Kilis Governor Süleyman Tapsız said that they are working on being able to grant Syrian the highest level of all forms of assistance.

This is a translation of an article originally written by İbrahim Güneş.