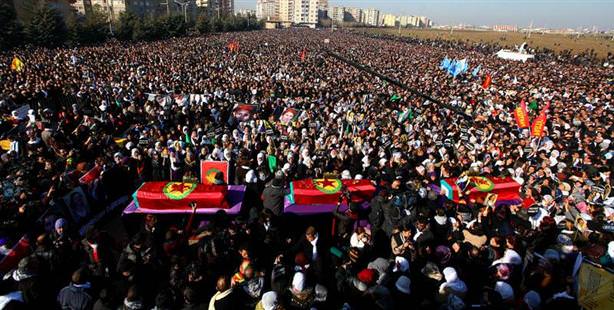 A crowd of 50,000 people came out to attend a funeral ceremony held in Diyarbakır for the three Kurdish women killed in Paris last week. Messages of harmony prevailed at the ceremony as attendants dressed in black in a show of mourning and donned white scarves as a sign of peace.

A ceremony was held in Diyarbakır on Thursday for the three women and members of the PKK, Sakine Cansız, Fidan Doğan and Leyla Söylemez, who were killed in Paris last week. The killings come at a crucial time as an ongoing peace initiative with the terrorist organization to drop arms ensues. Nearly 50,000 people flocked to the streets to attend yesterday's ceremony. BDP deputies and elected mayors donned white scarves in a symbolic representation of their commitment to establishing peace. White doves were also released during the funeral procession. The minimal number of Abdullah Öcalan posters that were on display during the event was also quite noteworthy. However, shops remained closed throughout the day.

The bodies of three women and PKK members, Sakine Cansız, Fidan Doğan and Leyla Şöylemez, who were found shot to death in Paris a week ago Thursday, arrived to Diyarbakır Wednesday night. The coffins were carried by nearly a thousand participants, including female deputies and members of the Kurdish opposition Peace and Democracy Party (BDP), as well as co-chair Gültan Kışanak to the Batıkent Square for yesterday's ceremony. Mainly women were visible carrying the coffins on their shoulders as they chanted slogans such as "We are all Sakine, We are all Leyla and we are all Fidan."

Joining the close ones and relatives of the departed were BDP co-chairs Selahattin Demirtaş and Gültan Kışanak, Democratic Society Congress (DTK) co-chairs Ahmet Türk and Aysel Tuğluk, Diyarbakır Municipal Mayor Osman Baydemir and all BDP deputies and municipal mayors were in attendance at the ceremony. While all wore black in a show of mourning, they also donned white scarves around their necks in a representation of solidarity for peace.

''THE BLOODSHED NEEDS TO STOP''

Addressing the nearly 50,000 spectators at the ceremony, BDP Co-chair Selahattin Demirtaş stated, "Let us declare once again, before these very coffins, that we want peace and for the bloodshed to stop. We have experienced suffering such as this for the past 100 years now. We will bring this country a dignified peace. It is now time to do this. We must be patient and we must be courageous. The Kurdish people have never run from peace. Even the families of the deceased are not seeking revenge. If you believe that the color of the tears shed by every mother is the same, then it is also this public's right to expect respect for all values." In a call for peace, Demirtaş stated, "These people are courageous and therefore they are ready for peace. Let us not miss this opportunity. It is now time for peace. We can put an end to this bloodshed and the death of our children. You need to also take a concrete step in order to prove your trustworthiness. Peace is the work of courage," stated Demirtaş.

"PEACE WILL COME THROUGH MUTUAL RESPECT"

Also speaking at the ceremony was DTK Co-Chair and Mardin Deputy Ahmet Türk who stated, "The Kurdish public will no longer accept anything other than peace. We have always extended the hand of peace; however they always led us into submission. It should be well known by all that the Kurdish people will never accept a life of dishonor. Peace will transpire through mutual respect, through the better acquaintance of our people and through justice, this is the only way we will ever be able to establish peace."

Speaking to the crowd, the tearful DTK Co-chair and Van Independent Deputy Aysel Tuğluk said, "We condemn these cut-throat, despicable killers. We want the perpetrators to be revealed as soon as possible. If not, the French government themselves will be under suspicion."

While dozens of thousands of people came out to witness the ceremony, shops in a majority of the city remained closed for the day. Public buses were also out of operation throughout the day. Shutters also remained closed for the day in Batman, Şırnak, Hakkâri, Siirt and areas of Mardin. Police reinforcements were brought into Diyarbakır from Şanlıurfa, Batman, Mardin, Siirt, Kahramanmaraş, Malatya, Elazığ and Gaziantep in order to provide security for yesterday's ceremony. Police teams were warned repeatedly to not allow any opportunities for provocation and to not act or intervene in any way unless given direct orders. A bus belonging to the BDP also made announcements calling for level-headedness and sensibility and as a result the nearly two-hour procession was peaceful and concluded without incident.

TODAY, VICTIMS WILL BE LAID TO REST

After yesterday's ceremony, the body of Sakine Cansız was taken to Tunceli, Fidan Doğan's was brought to Kahramanmaraş and Leyla Söylemez was delivered to Mersin where each will be laid to rest today in their respective homelands.

This is a translation of an article originally written by Müjgan Halis, Mesur Er, Hüseyin Kacar, Faysal Karadeniz and Emin Özmen.