142-years of history burned to ashes 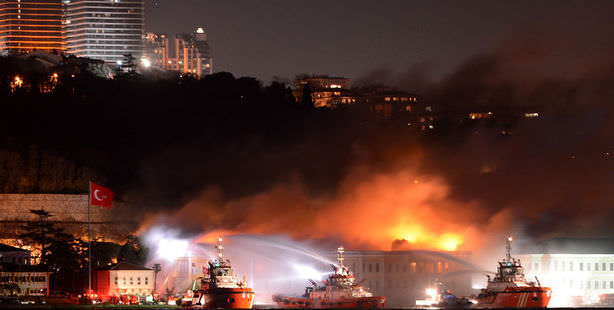 A historical building currently inhabited by Galatasaray University and situated along the Bosphorus in Ortaköy went ablaze yesterday when a fire erupted in the top floor of the three-storey building. Security guards who were on site immediately began extermination efforts; however it took hours to contain the fire due to the adverse southwesterly winds.

A 142-year-old building in Beşiktaş, which currently houses Galatasaray University, was turned to ashes last night in a fire it took firefighters hours to contain. University rector Dr. Ethem Tolga explains what transpired: "It was about 19:30 when smoke began billowing from a fellow faculty member's room. The fire alarm was set off and security immediately began extinguishing the fire. At this point the fire department was alerted and arrived on the scene. As they were writing their report, suddenly flames began to rise over the roof and engulfed the entire building."

THE RESPONSE WAS FAST, BUT SO WAS THE WIND…

Firefighting teams were called in from Beşiktaş, Sarıyer, Şişli and Beyoğlu and extinguish efforts were made from both the land and sea. The heavy winds made efforts tough and it took hours for the fire to be contained. Çırağan Street was closed to traffic and firefighters exerted great efforts to ensure the blaze did not spread to the nearby Kabataş Student Dormitory. It took a total of four and a half hours and 110 firefighters, 47 firefighting trucks and thee fireboats to extinguish the fire. However, the historical building that was engulfed in flames has now turned into ashes.

Areas of the building, which is mainly comprised of wood, have collapsed including the roof and intermediate levels. Firefighters say the fire was most likely caused by an electrical fault. Security guards on duty immediately intervened in the fire, however once it became evident they would be unable to contain the flames they called the fire department. Istanbul Governor Hüseyin Avni Mutlu said, "To lose these historical remnants to these sorts of fires saddens us all greatly."

Prof. Dr. İlber Ortaylı, for which a library that was named after him was located in the building which burned, expressed his great grief due to the fire and stated, "This building was an annex of the Çırağan Palace. The fact that a number of historical buildings along the Bosphorus that are being used as schools have gone up in flames is quite thought-provoking. There were a large number of irreplaceable books in the library. I alone donated 6,000," said Ortaylı.

Prof. Dr. Yıldızhan Yayla, the founding rector of Galatasaray University, which took over the historical building in 1992, expressed that he was devastated to witness the building ablaze. "I am watching this building burn down with great sadness. This is a fire that will result in irretrievable loss. History has now turned to ashes. I am now 75, and I have been familiar with this building since I was 11. I am waiting for the fire to be extinguished, however my pain is great," said Yayla.

Former Istanbul Firefighting Chief Metin Demir commented on the fire by stating, "Nearly 70 percent of this historical building of ours was made out of wood. If a fire erupts on the inside of these types of buildings, it can go unnoticed until it has spread throughout. There can be a build-up of dust on the roof and between the levels. This dust when ignited by even the tiniest of flames can erupt like gunpowder into a huge fire. We have a lot of historical buildings. At least from here on out, we can work on protecting those."

On December 24th, 2012, a historical building housing the Istanbul Department of National Education in Cağaloğlu erupted into flames. The historical Haydarpaşa Station was significantly damaged in a fire which erupted on November 28th, 2010. On July 13th, 2002, a 119-year-old building in Ortaköy, which housed the Gaziosmanpaşa Primary School, was also seriously damaged in a fire.

This is a translation of an article originally written by Mustafa Kaya, Barış Sözal and Bülent Ergun.