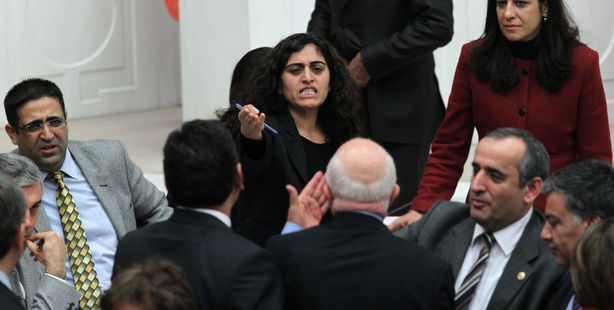 CHP’s İzmir Deputy Birgül Ayman Güler's statement that the Turkish nation and the Kurdish nationality are not equals led to fierce disputes in the assembly yesterday which had convened to discuss a bill to allow suspects to use their mother tongue in court.

The general assembly convened on Wednesday to discuss a bill which would legalize Kurdish being spoken in court however, disputes that surfaced during the opening deliberations led to an all out brawl between deputies from differing political parties.

The bill drafted by the government which seeks to legalize a defendant speaking in their mother tongue in court, led to serious tension amongst the deputies in the General Assembly yesterday which escalated into a brawl between Nationalist Movement Party (MHP) and Peace and Democracy Party (BDP) members. As deliberations on the bill began, MHP Deputy Oktay Vural stated that they were against the bill as a party because it was a demand made and pledged to during the Oslo talks between the government and the PKK terrorist organization.

Vural's statement, "We will never accept this imposition," was responded to harshly by BDP Muş Deputy Sırrı Sakık, who in turn was objected to by Deputy Parliament speaker Sadık Yakut. BDP Group Vice Chairman İdris Baluken proceeded to then object to Yakut giving the floor to Vural just when they were about to discuss the highly contentious bill.

Speaking in favor of the bill, Justice and Development Party (AK Party) Group Vice-Chairman Ahmet Aydın assured that the new bill in no way alters the official language used in courts and stated, "If one of our citizens who lived abroad felt more comfortable defending themselves in German then we would have to grant them that right." Following this remark, the comment, "that right is already granted by law" was heard coming from the rows occupied by MHP deputies. Aydın's statement that he wished "no discord was sowed" also led to a series of reactions.

Meanwhile, a scuffle erupted between BDP deputy Baluken and MHP's Erzurum Deputy Oktay Öztürk which led to a recess in the session. The dispute continued on during the break however and while other deputies attempted to break apart the quarrelling MHP and BDP deputies, MHP's Adana Deputy Seyfettin Yılmaz then proceeded to turn on Aydın from the AK Party.

Perhaps the tensest moment in the evening came during a speech by CHP's Izmir Deputy Birgül Ayman Güler however whose remarks spurred harsh reactions by BDP deputies. Güler openly stated that the Turkish nation and the Kurdish nationality are not equal and accused the AK Party of collaborating with the BDP in an attempt to erase the Turkish nation and citizenship from history. Güler's comments led to a fierce rebuttal by BDP's Istanbul Deputy Sabahat Tuncel as fellow deputies intervened in an attempt to hold the two back from engaging in a full-out scuffle.

WHAT DOES THE BILL ENTAIL?

DEFENSE IN MOTHER TONGUE: Even if the suspect speaks Turkish, if they feel they will be able to better express themselves in a different language during their defense, they will be allowed to and will be assigned a translator.

THE RIGHT TO CONJUGAL VISITS: With the passing of the proposal, married inmates will be able to hold conjugal visits with their spouses from 3-24 hours once every three months.

POSTPONEMENT DUE TO ILLNESS AND EDUCATION: The execution of sentences may be postponed of the suspect is suffering a grave illness or is completing their higher education.