PM Erdoğan: We are sincere therefore we will solve the Kurdish issue 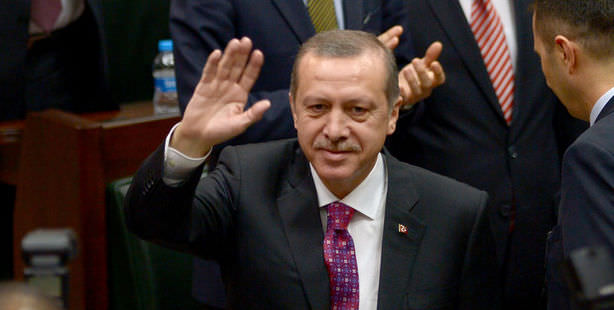 Erdoğan held a meeting with fellow AK Party deputies, mayors and organization leaders from eastern provinces in order to discuss the government’s ongoing peace process to bring an end to terrorism in the nation.

During the four-hour meeting between Erdoğan and his fellow AKP deputies, the prime minister presented the government's strategy to ensure the PKK drop their weapons. The deputies in return relayed pressing issues in the region as well as shared the views being discussed in the region regarding the ongoing peace initiative. While the deputies expressed how pleased they were with the ongoing process, Erdoğan ensured that their determination is sincere and delivered the following messages: "It is because of this sincerity that we will be able to solve this issue. We are the hope. This process will continue without interruption," stated Erdoğan.

The prime minister also pointed out how sensitive this situation is and requested that deputies be especially careful at this time, suggesting that they refrain from using statements or expressions that could be misconstrued. "Let there not be any negative statements. Do not be on the side of those who destroy this process. Do not argue with anyone. We should have a unified discourse. And let's ensure we use a language that will not make those in the east or those in the west uncomfortable," stated Erdoğan.

Prime Minister Erdoğan also offered tactical advice for the upcoming elections to the deputies on hand at the meeting. "Go to the region every week and speak directly with the citizens. Go from door to door," stated Erdoğan. The prime minister also mentioned that opposition parties are seeking to distort the meetings held in order to ensure the PKK drop their weapons. "Respond to the opposition's attempts to provoke and distort this process. You should explain what it is you are doing, and how the process is not only correct, but it is also being held with the best intentions," stated Erdoğan.

Responding to questions from the press regarding a second delegation heading to İmralı not having received the necessary authorization yet, Deputy Prime Minister Beşir Atalay said that no, the process has not been postponed. "We are conducting this process with sensitivity and are trying to be as transparent as possible. Let me just say this for now." Atalay also added, "When a development occurs announcements are made. We are not talking about the process extensively. There is significant community support and our only wish is for everyone to be sensitive to the process and offer their support."