Council of State ruling opens the door to a first 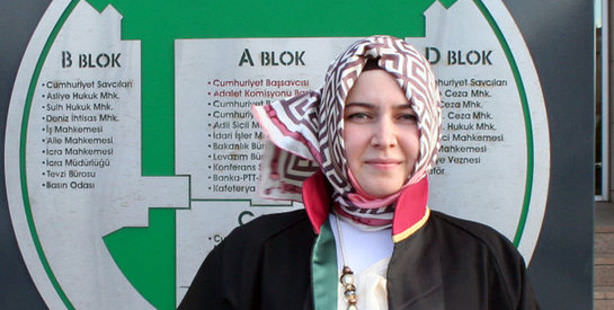 Following a recent ruling by the Council of State which stipulates that attorneys are not subject to the rules governing positions in public service and therefore are not prohibited from wearing headscarves, yesterday for the first time ever a lawyer attended a hearing wearing a headscarf. The court judge responded by filing a report on the incident.

The Council of State recently ruled again implementing a regulation included in the Turkish Bar Association's Code of Practice which states that attorneys should not wear headscarves while practicing law and yesterday, for a historical first in Turkey, attorney Şule Dağlı attended a hearing as a co-plaintiff, wearing a headscarf.

The judge overseeing the hearing, which was held at the Kadıköy 2nd Court of First Instance, included the statement, "The joint attorney was seen wearing a headscarf" in the proceedings report. When asked to comment on the situation, attorney Şule Dağlı reminded of the recent Council of State ruling on file number 2012/5257 to halt the implementation of Article 20 which stipulates lawyers should not wear headscarves while practicing law and said "It is for this reason that I am attended the hearing wearing a headscarf."
Dağlı went on to explain to the press, "The judge said they were uninformed of the issue and had not received a written statement announcing the ruling and would therefore be reporting the incident. The report is supposedly going to be sent to the bar association," stated Dağlı.