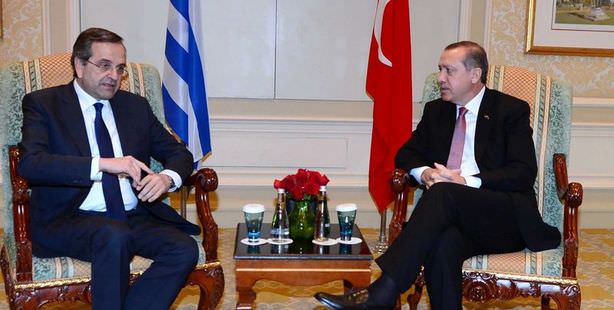 While in Qatar, Prime Minister Erdoğan held a surprise meeting with his Greek counterpart Antonis Samaras during which he proposed Turkey take on the building of a mosque in Athens so long as the Greek government offers their support.

During the meeting between Tayyip Erdoğan and Greek Prime Minister Antonis Samaras, which was an unexpected development that transpired while the prime minister was in Doha, the two discussed the long-standing plans to build a mosque in Athens. Erdoğan offered a proposal that Turkey assist in building the mosque in Athens as long as the Greek government is willing to issue the necessary licensing.

Speaking to the press following the Samara meeting, Prime Minister Erdoğan said, "We had the opportunity to review Turkey-Greece bilateral relations and the issues faced by residents of Western Thrace. We discussed turning Istanbul's Halki Greek Orthodox seminary into an environmental institute. A senior-level advisory council meeting will be held on March 5th in Ankara. They will be arriving prepared to discuss the issue in efforts to reap results," stated Erdoğan.

Prime Minister Erdoğan also commented on the issue of building a mosque in Athens. Athens is one of the few European capitals that do not have a mosque. "I was told that the proposal to build a mosque in Athens has been passed in parliament. We told them that it is not absolutely necessary that they be the ones to build this mosque and that if they grant us the necessary permission, we could be the ones to build it. Let us ensure that there will be a place for Muslim tourists who come to Athens to be able to conduct their prayers. Mr. Samaras displayed a positive attitude and we reached a mutual agreement that these sorts of issues can be solved on an understanding based on good will," stated Erdoğan.

Reporters asked Erdoğan if he expected to be able to handle the issue of the Halki Seminary in Heybeliada in the same manner, to which the Prime Minister responded, "It is possible."

Erdoğan's meeting with the Qatari Emir was centered on the crisis in Syria. Commenting on the discussion, Erdoğan said, "We had the opportunity to discuss the possibilities between us on the issue of energy. Secondly, we also talked about regional issues. We conducted a detailed evaluation of the situation in Syria and from here on out our association with the Syrian public will continue."

This is a translation of an article originally written by Duygu Güvenc.