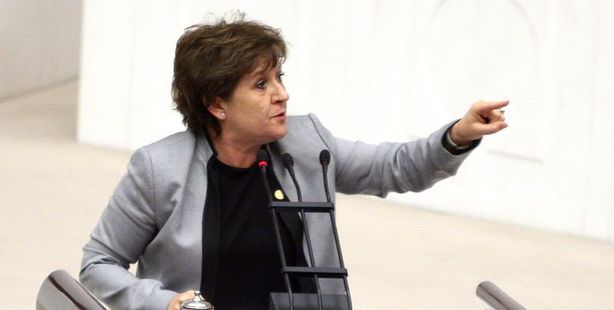 A number of the main opposition CHP youth wings from a variety of districts throughout Izmir came together to release a press statement calling on CHP Izmir Deputy Birgül Ayman Güler to resign. Güler is receiving widespread disdain and backlash for her statement in parliament, “You can’t equate Kurdish nationality with the Turkish nation.”

As reactions within the main opposition party continue to rain in on CHP Izmir Deputy Birgül Ayman Güler, it appears she is now drawing backlash from the Izmir wing of her own Republican People's Party for comments she made in a General Assembly meeting to discuss allowing court defenses to be made in the native tongue. Yesterday, in a joint press announcement released by a number of district youth wings of the CHP, Güler was asked to resign.

Releasing the press statement from in front of the party's district headquarters, CHP's youth wings state that Güler's words were not in line with the party's program, history and principles and have led the way to unease in both left and social democratic circles.

Speaking on behalf of the CHP youth, Bornova Youth Wing Member Sezgi Kadıoğlu stated, "A variety of paths have been tried in this country in years past in order to put an end to the bloodshed, however these methods which contained elements of fascism and militarism did not reap the expected results. There was just one road left that had not been tried and that is peace. We, as the youth who have embraced left-social democratic values, believe that all of the nationalities residing on Turkish land can live altogether in brotherhood. And we, through the Republican People's Party which we have selected as our vehicle o conduct active politics on, are currently struggling to ensure our philosophy; political views and statement all reflect our axis of brotherhood, equality and peace. However, unfortunately through what has transpired, we realize that there are some people within this first and single social democratic party which believe this process can be solved in an environment of peace and brotherhood, that pay no attention to the tears of mothers and that have a nationalist-racist stance and use any opportunity to express it, which has given us the need to share our sentiments with the public. We definitely do not accept the statement made by CHP Izmir Deputy Birgül Ayman Güler in the Assembly last week, which we believe were derived from an incorrect and entirely fascist stance," stated Kadıoğlu.

"We are ready to pay the price no matter what it be in order to see results from our beliefs in equality, brotherhood and peace. We, as members of the Republican People's Party, who believe in the principle of equality and brotherhood and dream of a world which defends living altogether and where peace is what rules and not within a militarist system, are calling on Birgül Ayman Güler and any others who share her sentiments, to resign. Let it not be forgotten that blood and tears will govern wherever peace is not dominant. Come and let's heed the tears and cries of our mothers and as brothers let us defend the right to live together," read Kadıoğlu.