Trade persists in the East despite the PKK 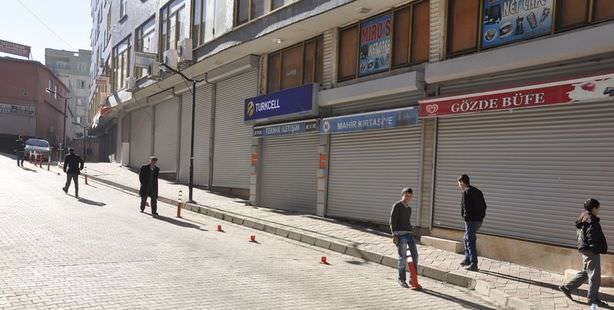 Merchants and vendors in Şırnak have put forth a surprising proposal to the military in a means to offer support to the ongoing peace process. Local retailers are saying, “We won’t pull down our shutters, if you shop from us.” The military in return, is warming to the proposal.

A surprising development has surfaced in the Southeastern Anatolian region, which will hopefully offer support to the ongoing peace initiative to put an end to terrorism. Merchants in Şırnak are now making a move to establish a formula which will hopefully put an end to the forced action of having to "shut down their shutters" in times of strife in the area. Representatives from local retailers had the opportunity to meet with military members in an effort to reach a consensus on a formula to ensure that "closing down shutters" becomes a practice of the past.

A group of representatives for Şırnak's merchants met with military officials in order to suggest a proposal that will not only revive trade in the region but may also contribute to the ongoing peace process. Retailers expressed to the military that they would like to be able to keep their shutters open and thereby stand up against pressure from the terrorist organization to shut down, however in order to be able to do so, they suggest the military do their shopping from the shops in the local markets rather than directly from the military outpost.

The military in return has responded favorably to this surprising proposal from Şırnak's retailers. In fact, local vendors have been requesting soldiers do their shopping in the city centers for awhile now.
Vendors feel that by putting an end to the practice of shops closing their shutters, the move will not only offer a revival for trade in the region, but will also be a significant move to contribute to the government's ongoing peace process. This new move made by Şırnak's vendors will hopefully lead to similar actions in other nearby regions.

Demonstrations by way of closing down shutters used to last for days, however they are now winding down to a single day or less. Sources say that the meeting of military and local vendors will bring about important social results in the region. According to the information obtained, it will be a sensitive process for the military to respond to retailers demands which will in effect render them more inclusive in the ongoing peace process. Military members will begin integrating with local vendors in regions where pressure from the PKK is less invasive.

"IT WILL BE A CONTRIBUTING FACTOR TO THE PEACE PROCESS"

Commenting on this new formula to SABAH, Chairman of Şırnak's Chamber of Commerce Osman Geliş says, "Vendors and soldiers need to become integrated, which is something that will only happen if they are brought together. It is this coalescence that will provide a significant contribution to this ongoing process everyone is aspiring to reach. Retailers have been trying to draw soldiers into the city centers for a long time now. However, this is not a single-sided situation, instead it is one in which both sides will have to bear responsibilities," states Geliş.