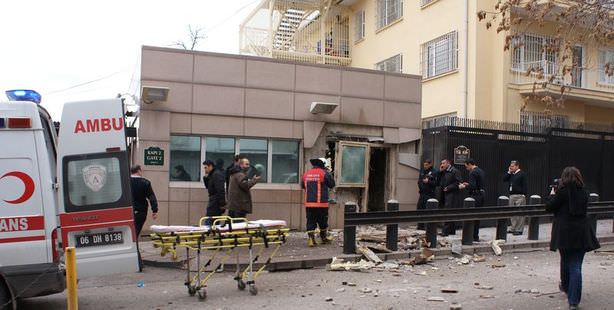 An explosion at a side entrance to the U.S. embassy on Paris Street of the Turkish capital Ankara killed at least two people and wounded several others on Friday. One of the dead is said to most likely be the suicide bomber who staged the attack. Numbers of firefighters and ambulances have been dispatched to the site of the blast.

Turkish police suspect the suicide bomber who attacked the U.S. Embassy on Friday, killing himself and a security guard, belonged to a far-left militant group, state broadcaster TRT said.

The bomber, about 30-years-old, used plastic explosives in the attack. He is believed to have spent time in prison on terrorism-related charges and was a member of the Revolutionary People's Liberation Party-Front (DHKP-C), TRT said.

Erdoğan calls on everyone to stand up together against heinous attacks

The attack at the U.S. Embassy in Turkey's capital on Friday that killed two people was a suicide bombing, Prime Minister Tayyip Erdoğan said in comments broadcast live. Erdoğan called for a global effort to combat "terrorist elements" and said that everyone is now on the case and "We will all stand together against these attacks" Meanwhile, the U.S. State Department says they are working with Turkish police to investigate the U.S. Embassy blast in Ankara.

U.S. Ambassador Francis Ricciardone emerged through the main gate of the building, which is surrounded by high walls, shortly after the explosion to address reporters, flanked by a security detail as a Turkish police helicopter hovered overhead. "We are very sad of course that we lost one of our Turkish guards at the gate," Ricciardone he said, thanking the Turkish authorities for a prompt response. The bomber was also killed.

U.S. Ambassador Ricciardone thanked Ankara Governor Alaaddin Yüksel and Police Chief Kadir Ay as well as the Turkish state and said that Washington's close cooperation with Turkey on terrorism will continue. Ricciardone said that today's incident shows just how much harm terrorism causes for both countries and that these sorts of attacks will only increase their determination to reach a solution and ensure further cooperation with Turkey.

U.S. Embassy press release thanks Turkey for assistance and reactions to blast

A press release from the U.S. Embassy in Ankara reads: "At approximately 13:15 on February 1, there was an explosion at the U.S. Embassy. Appropriate measures have been taken by the Turkish National Police who are now investigating the incident. The U.S. Embassy would like to thank the Turkish Government, the media, and members of the public for their expressions of solidarity and outrage over the incident. More information will be made public when available."

A security post at the entrance to the embassy where the bombing took place has been demolished and witnesses claim the suicide bomber responsible for the blast set off an explosion in front of the security checkpoint which took his own life. While a number of people were stated to be wounded, a witness saw one wounded person being lifted into an ambulance as police cordoned off the area following the explosion, which sent smoke and debris flying into the street. According to the information obtained, a police officer was also killed in the blast.

Television footage showed a door blown out and masonry from the wall around it scattered in front of the side entrance, although there did not appear to be any more significant structural damage to the building.

"It was a huge explosion. I was sitting in my shop when it happened. I saw what looked like a body part on the ground," said travel agent Kamiyar Barnos whose shop window was shattered around 100 meters away from the blast.

According to the initial information released by the police, the suicide bomber was a middle-aged male, his nationality of which is still undetermined. Police have cordoned off the area in case a second bomb was planted. The body parts said to have been found in the vicinity following the blast were claimed to belong to the suicide bomber. Everyone who was inside the building went into the embassy shelter after the blast. Supposedly there were wounded amongst the people inside including a heavily injured woman who was later brought outside along with another wounded victim to be taken to the hospital. They are stated to be in critical condition. Vehicles and buildings in the vicinity of the blast were also visibly damaged.