U.S. Ambassador says we will fight terrorism together 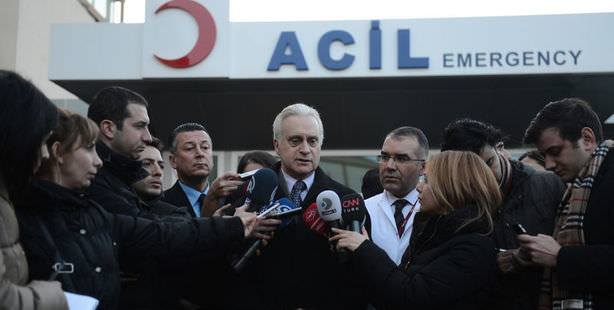 The U.S. Ambassador to Ankara Francis Ricciardone told reporters outside of the embassy building that the attack only shows just how much harm terrorism cause for both countries and said they are committed to cooperate with Turkey against terrorism.

U.S. Ambassador Francis Ricciardone emerged through the main gate of the embassy shortly after the explosion to address reporters, flanked by a security detail as a Turkish police helicopter hovered overhead.

U.S. Ambassador Ricciardone thanked Ankara Governor Alaaddin Yüksel and Police Chief Kadir Ay as well as the Turkish authorities for a prompt response. "Washington and the Turkish state's close cooperation on terrorism will continue. Ricciardone said that today's incident shows just how much harm terrorism causes for both countries and that these sorts of attacks will only increase their determination to reach a solution and ensure further cooperation with Turkey.

Ricciardone, who in the evening paid a visit to the family of security guard Mustafa Akarsu who was killed in the blast, described the victim as a "hero" and said, "We're very sad of course that we lost one of our Turkish guards at the gate. Mustafa was a great hero. He saved all of us today. God only knows how many people would have died if he hadn't been here," said Ricciardone.

The U.S. Embassy in Ankara released a statement thanking the Turkish government, media and the Turkish public for the solidarity displayed with the US Embassy and their show of anger following Friday's blast at the US Embassy.

GÜLER: BOMB WAS SET UP ON THE PERPETRATORS STOMACH

Minister of Interior Affairs Muammer Güler made an announcement after visiting the U.S. Embassy in Ankara yesterday following the blast. Güler stated that the Embassy actually has an extremely serious and impenetrable security system. "It is impossible for someone coming from the outside to enter the building. However, people can come for visits and are able to pass through security if they are greeted by someone." Güler also pointed out that the bomb was strapped to the perpetrators stomach are and was detonated in the area where visitors are registered.

'WE ARE EXTREMELY SENSITIVE WHEN IT COMES TO SECURITY'

Foreign Affairs Minister Ahmet Davutoğlu also commented on the explosion at the entrance of the U.S. Embassy in Ankara by stating, "It is an extremely upsetting development that an attack such as this has transpired in our country." Responding to questions from the press in Serbia Minister Davutoğlu stated, "We have always shown great sensitivity to protecting foreign representatives in Ankara, and this sensitivity will continue." Davutoğlu also spoke with his U.S. counterpart Hillary Clinton and called U.S. Ambassador Ricciardone to express his condolences.

A MESSAGE OF CONDOLENCES TO OBAMA

President Abdullah Gül sent a message to U.S. President Barack Obama to express that this attack was just as much against Turkey as it was the United States and said it has only worked to further instill the joint volition against terrorism. "I strongly condemn this atrocious attack on behalf of myself and the Turkish public. Prime Minister Erdoğan also sent U.S. President Obama a message which stated, "This terrorist attack which targeted the U.S. Embassy is at the same time an attack against Turkey. This incident has once again exposed just how essential it is for Turkey and the United States to increase their cooperation in the fight against terrorism," stated Erdoğan.