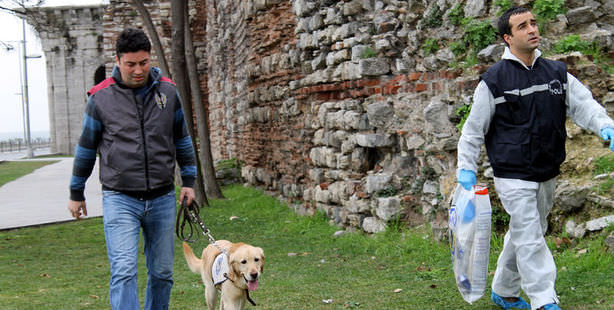 Police continue to look for any leads that may answer the wide array of questions surrounding the death of an American tourist, whose body was found in the ruins of Istanbul's old city wall in Sarayburnu on Saturday.

Police have now questioned 22 people who reside in the lower-income Cankurtaran area of Sarayburnu where the body of Sarai Sierra was found. Police have found traces of dragging in the area where Sierra's body was, which has strengthened the suspicion she may have been killed elsewhere and her body dumped in the ruins.

After a five-hour autopsy conducted yesterday, the cause of Sarai Sierra's death was a blow to the head. According to the information obtained, one of the scenarios the police are investigating is the possibility that Sierra may have been in the vicinity to take photographs when she was possibly attacked and murdered by a homeless man.

Local residents say that the area where Sierra's body was found is regularly frequented by homeless people, drug addicts and voyeurs who watch female tourists walking by along the shore.

Sarai Sierra, 33, a mother of two, aged 9 and 11, from New York City, had been travelling alone and was reported missing on January 21. She was supposed to fly home that day which was the last day she spoke with her husband. The police investigation has revealed that Sierra made plans to meet with a friend named Taylan to take photographs on the day she went missing. When Taylan never showed, Sierra was seen on city surveillance cameras crossing over the Galata Bridge on her own until she got lost in the crowds in Eminönü. Taylan was questioned, and then subsequently released by police.

A body believed to belong to Sarai Sierra was discovered in the ruins of the old city wall by residents of the Sarayburnu neighborhood and police say that Sierra's driving license was found on the body.

"(We are) 70 to 80 percent sure the body belongs to her but this is not absolutely certain," an Istanbul police official stated, adding more tests needed to be completed. Police are also investigating the possibility that Sierra had been killed elsewhere and her body moved to Sarayburnu. "Investigations are still continuing and police officials are still in the field," a second police official said.

Meanwhile, a woman told police that she saw a man carrying a body inside a blanket from an older model white car. The woman said that she saw a female hand come out of the blanket. The fact that Sierra's body was found near a blanket has added to the suspicion her body may have been brought to the site.

Istanbul Chief of Police Hüseyin Çapkın has confirmed that a head wound was the cause of death of the American photographer.

Thirteen suspects, including two women, have been detained in connection to the case.